Miraculous: Tales of Ladybug and Cat Noir
by Thomas Astruc

The movie was first revealed by Jeremy Zag during the "Miraculous" panel at ComiKon İstanbul 2018 on September 29, 2018.[4]

On December 5, 2018, it was revealed that film will be released in 2021. Its plot will be a mix between the origin of the universe and the ending to Season 5. Finishing Season 4 and Season 5 before the movie is a priority for the studio.[1]

On December 6, 2018, during the Miraculous panel at Comic Con Experience 2018, Zag revealed that film will be a musical and feature music composed by himself.[5][6]

On May 16, 2019, during Cannes Film Festival 2019, it was confirmed that the movie will be called Ladybug & Cat Noir Awakening. It was revealed that production of the movie is underway and that the film is billed as a romantic fantasy adventure.[3] Michael Gracey, the director of The Greatest Showman, is working on the movie too.[2]

On June 7, 2019, Jeremy Zag revealed via his Instagram story, a song for the movie called "The Wall Between Us" (Ce mur qui nous sépare), performed by Lou & Lenni-Kim.

On July 24, 2019, another song performed by Lou called Noveau Passage was revealed.[7]

On October 5, 2019, a short animated teaser featuring Ladybug was put up on Jeremy Zag's Instagram.[10]

On January 8, 2020, Jeremy Zag revealed some spoilers from animated musical.[12]

On January 23,2020, Bryce Papenbrook and Cristina Vee are now starting to dub the movie. 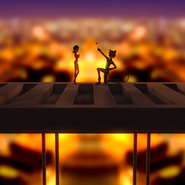 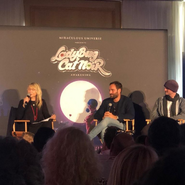 Concept art posted by Jeremy Zag on his Instagram. 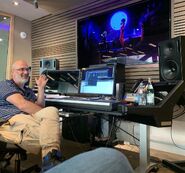 Retrieved from "https://miraculousladybug.fandom.com/wiki/Ladybug_%26_Cat_Noir_Awakening?oldid=549027"
Community content is available under CC-BY-SA unless otherwise noted.