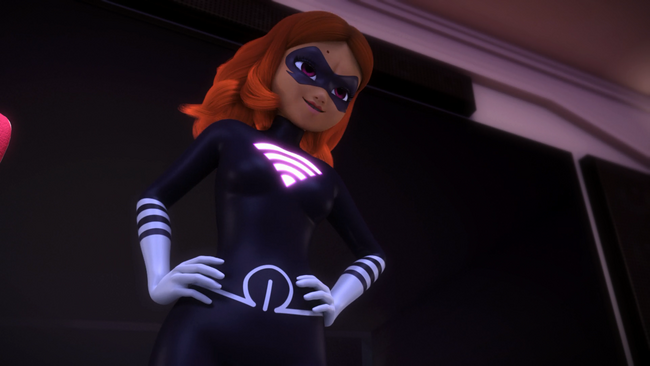 Mistakenly believing that Chloé is Ladybug, Alya gets suspended from school for her nosiness and becomes akumatized into the villain Lady Wifi.[8]

Alya cuts Ladybug's face out of a photograph during class. She holds the picture up to her classmates' faces to look for the perfect fit, trying to find out who Ladybug is. She stops on Chloé, who points at Miss Bustier, who is standing in front of Alya's desk. Once she realizes the entire class is watching her, she puts the picture away. Miss Bustier asks if Marinette is still in the bathroom since she has not returned to class. Alya shrugs. When class ends, Miss Bustier gives Alya Marinette's homework to pass on to her.

After school, Alya calls Marinette but is forwarded straight to voicemail. Alya then notices Chloé pulling several Ladybug-themed items from her locker (including a costume and yo-yo similar to Ladybug's) and putting them in her bag. Believing Chloé to be Ladybug's secret identity, Alya calls Marinette, only to be directed to voicemail again. She sees Nino and drags him with her to explain what she found out. Nino sympathizes with Alya's inability to contact Marinette, as Adrien also disappears for hours on end when he tries to call him, although Nino blames it on Mr. Agreste's strictness. Alya checks her phone and finds a news report that Ladybug has once again saved Paris. The news report focuses mainly on Ladybug, with Cat Noir in the background behind reporter Nadja Chamack.

Alya recognizes the yo-yo in Ladybug's hand as the yo-yo Chloé took out of her locker and tells Nino that she's figured out Ladybug's secret identity and whispers it in Nino's ear: Chloé is Ladybug. Nino laughs at her revelation, saying Chloé is too narcissistic to be a hero.

Marinette comes home and finds that Alya has dropped off her book bag and tablet with Sabine at the bakery. Alya also left a note, telling Marinette to call her because she figured out who Ladybug is. Marinette is a little panicked, but when she tries to call Alya back, she finds that she doesn't have any signal. She wanders onto the roof to find a workman, who tells her that they're updating the service. Marinette spends the rest of the day doing her homework.

When she wakes up at her desk the next morning, Marinette realizes that she's already an hour late to school. Meanwhile, Nino is still skeptical that Chloé is Ladybug, but Alya has him distract Chloé while she tries to take a picture of the evidence in Chloé's locker. However, Sabrina and Kim catch Alya snooping, and she and Chloé wind up in Mr. Damocles' office. Mr. Damocles gives Alya detention after school, but by citing her right to privacy and the school's theft policy, Chloé uses her father's name Mayor Bourgeois to blackmail Mr. Damocles into suspending Alya for a week.

Alya storms out of the school just as Marinette runs in, Alya swears to expose Chloé and tarnish her reputation as Ladybug. In his lair, Hawk Moth senses Alya crying and her anger, sending an akuma her way. The akuma lands on her cellphone and transforms her into Lady Wifi.

Marinette sneaks into Miss Bustier's class but disrupts it by shouting, "What?!" twice when she learns that Alya was suspended for trespassing in "Ladybug's" locker. Miss Bustier sends Marinette to the principal's office, where she finds Mr. Damocles frozen in his seat with a pink pause sign on his chest. Just then, Lady Wifi uses the school projector system to play a recording of herself. She introduces herself as the deliverer of truth and promises to show all of Paris who Ladybug really is. Recognizing Alya from the charm on her phone, Marinette transforms into Ladybug to save her best friend.

Miss Bustier dismisses her class for their safety. Adrien runs to the bathroom to transform into Cat Noir, reasoning that Lady Wifi will no doubt pay Chloé a visit if she really is Ladybug. Later that evening, he waits on a rooftop across the street from Le Grand Paris and watches Chloé through her window. He finds her dressed as Ladybug while practicing throwing her yo-yo and panics, thinking that he might have fallen for Chloé. However, the real Ladybug shows up beside him and reassures him by explaining that Chloé is just a huge fan.

Chloé's cellphone rings. When she answers, Lady Wifi uses the phone to teleport into the room. She freezes Chloé with a pink pause icon and opens a video recording icon to broadcast Chloé's unmasking to the public. Cat Noir and the real Ladybug arrive on the scene and Lady Wifi realizes her mistake. When she tries to freeze them, they escape into the stairwell and lure her toward the basement of the building where there's no signal.

Lady Wifi catches onto their plan and leaves to set a trap. Ladybug and Cat Noir then run back up all the stairs, only to find that the door on every floor has a lock icon on it. Meanwhile, Cat Noir wants him and Ladybug to get to know each other outside the costume, but she brushes him off because they have more important things to worry about. They finally reach an unlocked floor and kick the door open, finding themselves in the hotel's dining area. All the tables have a phone on them. They soon learn that Lady Wifi can use them to teleport around the room. Ladybug starts smashing the phones with her yo-yo and Lady Wifi flees into the kitchen, where she locks the door, trapping Ladybug in the kitchen with her. Cat Noir uses the service elevator in the dining area to get into the kitchen.

Lady Wifi manages to corner Ladybug against the wall and locks her hands down. She then re-opens the video recording icon and proceeds to try and take off Ladybug's mask. It appears to be glued on and won't come off. Just then, Cat Noir arrives in the food elevator to rescue Ladybug, but Lady Wifi traps him in the freezer and locks the door. The impact knocks the ring off Cat's finger, and he transforms back into Adrien and is unable to find the ring. Plagg refuses to help Adrien, stating that it's too cold.

Hawk Moth advises Lady Wifi to force Ladybug into using Lucky Charm. When her time runs out, the video recording will broadcast her detransforming, and Lady Wifi can take her Miraculous. Lady Wifi unlocks Ladybug's hands, but leaves the recording on, disappearing and leaving her in the kitchen to rescue Cat Noir from the locked freezer.

Chloé manages to escape the building and join her father, Mayor Bourgeois and the police waiting outside. When her phone rings, she answers, and Lady Wifi teleports from the phone onto the hotel's roof, forcing Paris to watch as Ladybug tries to save Cat Noir. Trying to kick the door down doesn't work, so she uses Lucky Charm, and a frozen meal appears. Using her lucky vision, she spots the non-microwaveable icon on the box, the lock icon on the freezer door, and a nearby microwave oven. She puts the non-microwaveable dinner in the microwave and blows it up to diffuse the signal. The door unlocks just as Adrien, nearly frozen to death, finds his ring and transforms back into Cat Noir. When Ladybug opens the door at last, he passes out and falls on top of her, worn from the cold. However, he awakens quickly, and realizes Ladybug has used Lucky Charm, shortening their time to defeat Lady WiFi.

Because she is running out of time, the heroes have to work quickly to stop Lady Wifi. The kitchen door is still locked, but Ladybug suggests blowing up the signal receiver on the roof. Cat Noir covers the camera icon with a pot and uses the food elevator to get out while Ladybug waits in the kitchen. Growing suspicious, Lady Wifi returns and chases Cat Noir onto the roof. He distracts her by throwing his staff at her and then uses Cataclysm to destroy the signal receiver. Lady Wifi loses her powers, the recording and lock icons in the kitchen downstairs dissolving as Ladybug's earrings beep down to two spots. Ladybug escapes the kitchen and shows up on the roof soon after. She uses her yo-yo to yank the phone out of Lady Wifi's hand, smashing in on the ground. She captures the akuma and returns everything back to normal with Miraculous Ladybug.

Lady Wifi turns back into Alya, who is thrilled to see Ladybug and Cat Noir. However, Ladybug is about to detransform, so they escape from the roof before Alya can get an interview. They run into the hotel lobby and Ladybug ducks inside a closet. Cat Noir tries to stop her, promising not to tell anyone who she is, but she says that "nobody must know who we really are, not even us." The closet door swings between them just as her transformation wears off and Cat Noir is tempted to open the door. Conflicted, he ultimately decides not to betray her trust and leaves, closing the door for her.

Adrien runs outside of the hotel and opens up his jacket. Plagg flies out and questions Adrien. He says that "the love of his life" was right there. He asks why he shut the door for her, and what he was thinking. Adrien replies saying that he can't think when he's with Ladybug.

The next day, Marinette and Tikki are talking about secret identities. Both deem it safer that her being Ladybug should remain a secret. Not long after, Alya appears on Marinette's balcony. Alya has a new phone and has noticed that when she draws a costume over a picture of Adrien, he kind of looks like Cat Noir. Marinette is offended that Alya would compare Adrien to someone like Cat Noir. Marinette jokes that Alya should send the photos of Adrien to her. She grabs Alya's phone, laughing as Alya chases her around.