LadyLion is an upcoming character of Miraculous: Tales of Ladybug & Cat Noir. She will appear Ladylion animated musical.[1]

She has black skin with pink lips. 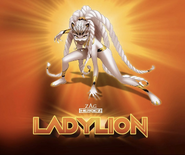