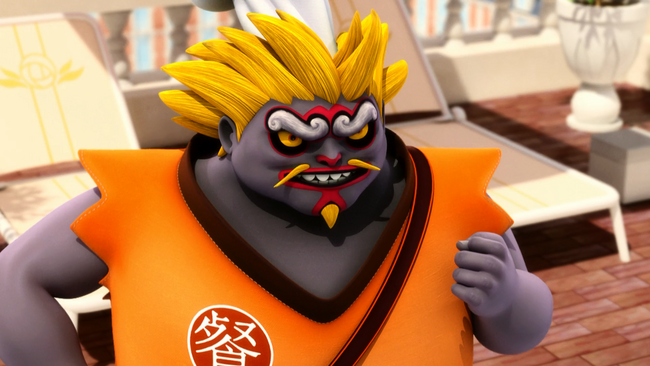 When Chloé sabotages a famous chef's dish, he gets akumatized into Kung Food, and those who taste his soup are under his control.[6]

When his dish at a competition is sabotaged, Marinette's great-uncle, chef Wang Cheng, becomes Kung Food, who recruits henchmen with his cooking.[7]

A chef's recipe is sabotaged by Chloé, and soon people who eat his meals become troublemakers.[8]

Marinette is at her home, waiting for her mother's uncle, Wang Cheng, to arrive. Wang is Chinese, so Marinette uses an app on her phone which helps her with the pronunciation. She has a bouquet of flowers for him but worries that it might not be good enough. It is revealed that Wang is a cook with a global reputation and is in Paris for a cooking competition called "The World's Greatest Chef."

When Wang arrives, Marinette rushes to the door and tries to greet him in Chinese but fails. She gives him the bouquet (from which he starts to pluck out the petals) while she uses the phone to translate the greeting for her. The phone does that but also translates (and repeats) the "Ugh, this is so lame!" that Marinette had said immediately after. Then, after Marinette manages to silence the phone and invites her uncle inside, she calls Alya to ask for help. Alya reassures her and says she has an idea and then hangs up. A few minutes later, Adrien arrives at the door. Marinette, after an initial surprised reaction, asks him what he's doing there. Adrien explains that Alya called him and asked him to act as an interpreter since he knows Chinese. Marinette asks where Alya is, and Alya promptly texts her saying that Marinette now owes her.

Wang, Marinette, and Adrien then ride in Adrien's limousine to Le Grand Paris, where the competition will take place. While Adrien and Cheng Shifu are conversing in Chinese, Wang reveals that he knows a little bit of their language, but he's a very bad speaker.

Once they arrive, the Mayor warmly greets Wang, and the TV host, Alec Cataldi, asks him which dish he will prepare. Wang answers, "Celestial Soup." After the interview, Wang begins to cook and leaves Adrien alone. Marinette uses the opportunity to apologize to him since the fact her uncle spoke their language meant that she didn't need an interpreter after all. Adrien accepts the apologies and even thanks her for giving him the opportunity to practice his Chinese. Adrien also says that he's honored to have met Wang since he is a "shifu", which means "master."

Soon, Chloé shows up and starts criticizing Cheng Shifu's choice to make a soup instead of sushi like everyone else. Adrien replies that Cheng Shifu is Chinese and that sushi is a Japanese dish, but Chloé brushes him off. She then reveals that she is a member of the jury for the competition and states that she will refuse to give a high vote for Wang's dish. So Marinette steps up and tells Chloe that she has no taste at all and that Cheng Shifu doesn't need Chloe's vote because all the other judges will love his dish. Angered, Chloé storms off. Adrien then compliments Marinette for defending her uncle and says that he would have been proud if he had been there. However, Marinette answers that she's not so sure and that she fears that her uncle might not like her as he even ruined the bouquet she prepared for him. Adrien reassures her, saying that Cheng Shifu told him that he would use the flowers for the soup and that he is always happy when surprise ingredients come into his life. Adrien suggests that Wang showed Marinette his respect in his own way.

Chloé, angry about Marinette's previous statements to her, storms into the kitchen where Wang is making his meal for the jury and tells him that Marinette is outside and wants to talk to him. Once Wang leaves the kitchen, Chloé mixes several random ingredients into the soup in order to ruin the flavor and get a negative response from the jury. Wang renters the kitchen and says that Marinette wasn't there, but Chloé brushes him off, saying that she, "doesn't speak Japanese," much to Wang’s confusion.

Next, the five jury members are introduced: André Bourgeois, Chloé, Jagged Stone, Marlena Césaire, and Alec. When Wang presents the sabotaged dish to the judges during the live broadcast, they all react with disgust and give him scores that Alec says are the lowest scores ever seen on the show. Marinette apologizes to Wang for provoking Chloé and causing this, but Wang leaves, ashamed over his loss.

Hawk Moth senses Cheng Shifu's frustration and sends an akuma after him. Wang realizes that Marinette is right about Chloé, and the akuma possesses his chef hat. Hawk Moth offers Wang the chance to be the world's greatest chef and seek revenge on Chloé and transforms him into Kung Food. The judges who tasted his dish earlier come under his control, and he makes them capture Chloé. They then pour indestructible caramel over the entire building, trapping Adrien and Marinette inside.

Marinette realizes that Kung Food is actually Wang. Meanwhile, the brainwashed judges are making an enormous pot of soup in the rooftop pool, which Chloé is suspended above. Marinette and Adrien transform into their respective superhero forms; encounter each other in the lobby; and run to the elevator so they can go to the roof, but a flying onion-shaped security camera is monitoring them, allowing Kung Food to see what they are doing. After asking Hawk Moth about the two superheroes, Kung Food decides to also cook Ladybug and Cat Noir in the soup, and sends Jagged Stone to go capture them. Kung Food reveals to Chloé that she is going to be cooked in the soup as well.

When Kung Food realizes that the heroes defeated Jagged Stone, he sends André Bourgeois to fight them. When the elevator stops, the Mayor appears in front of Ladybug and Cat Noir, wielding a string of sausages and potatoes. Before Ladybug and/or Cat Noir attack him, he attacks with the string and manages to restrain Cat Noir, but before he can grab Cat Noir's Miraculous, Ladybug tricks him into copying her yo-yo moves with his string, causing him to accidentally bring down a chandelier on top of himself. The fallen chandelier creates a hole in the ceiling, which Ladybug and Cat Noir use to ascend to the floor above.

Kung Food then orders both Alec and Mrs. Césaire to attack the heroes. The two of them meet the heroes and attack, respectively, with a crossbow that shoots exploding stinky cheese bombs and a bow that shoots cake arrows. After winning the fight, Ladybug and Cat Noir use the elevator to go up to the roof and save Chloé from being boiled alive.

Angry that his soup is ruined, Kung Food begins to fight the heroes. Ladybug assumes the akuma is in Kung Food's chef hat and promptly uses Lucky Charm, which gives her a credit card machine. After mocking her for trying to defeat him with a piece of paper, Kung Food takes a giant sword made of pizza from his bag and resumes his fight with Cat Noir. After figuring out what to do, Ladybug soaks the paper from the machine in Kung Food's soup and wraps the damp paper around him, trapping him. Cat Noir uses his Cataclysm on Kung Food's bag, and Ladybug grabs the chef hat and tears it apart, revealing the akuma. Ladybug catches the akuma and purifies it. She then tosses the check machine in the air and cleanses the city, returning everything, including the judges and Cheng Shifu, back to normal.

Later, in the kitchen, Marinette asks Wang if he can teach her how to make Celestial Soup. Chloé then appears in the doorway and insults Wang for making the soup again. Irritated, Adrien asks her if her father had kicked her out of the jury because she sabotaged Wang Cheng Shifu's Celestial Soup. Chloé denies this, saying that she had resigned of her own accord.

During another broadcast of The World's Greatest Chef, Wang makes the Celestial Soup again (indicating that after learning of Chloé's sabotage, they decided to give Wang a second chance), getting very positive reactions from the judges. Wang tells the judges that he no longer calls it Celestial Soup but, rather, Marinette Soup after his great-niece. Adrien, Marinette and her uncle also eat the soup.