Kid Mime was a character from the old, unused concept of Ladybug and Cat Noir being in a team of superheroes called Quantic Kids along with Melodie and Mercury, replacing Sparrow. However, the concept was discarded, so Kid Mime never appeared outside concept art.

He was made to replace Sparrow because producers thought that the Mime was a great character and they didn't want to keep him as an adult villain only.[1] He wasn't developed as a character before the superhero team concept was discarded, however.[2]

Currently, it is unknown if Kid Mime exists in the Quantic Universe.[3]

Based on concept art, Kid Mime had dark brown hair and blue eyes.

In civilian form, he wore a v-neck white and blue striped t-shirt that is solid white on the top and solid blue on the bottom, with a blue shirt underneath. He also wore dark blue jeans.

Much like the Mime, Kid Mime could mime anything, and whatever he mimes will work like a real, solid, yet invisible object. 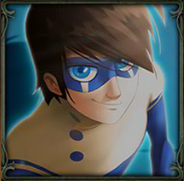 Concept art of Kid Mime (bottom) in the Ladybug Artbook.