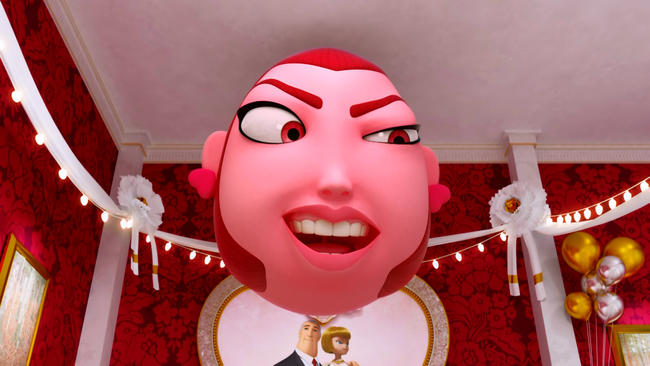 This episode is also the 1st part of the Season 3 2-part finale, "The Battle of the Miraculous."

At a celebration for their twentieth anniversary, the Bourgeois couple is akumatized into Heart Hunter, a two-headed Cerberus that devours love.[6]

The Bourgeois couple gets akumatized; Ladybug and Cat Noir faces the Bourgeois couple; Now Hearthunter, a Cerberus with two heads constantly fighting each other, they devour all the love in Paris. Ladybug seeks the help of Master Fu.

The episode begins with Marinette narrating about how everybody experiences different kinds of losses.

As Marinette leaves to deliver some macarons to her parents at The Grand Paris, she runs into Luka outside. Luka tells her that he's finally found the tune that matches Marinette. He plays it for her and then gives her a ride to Le Grand Paris on his bike.

At The Grand Paris, Andre and Audrey Bourgeois are celebrating their 20th wedding anniversary. Gabriel presents them, via Nathalie, with The Gabriel Couple Cloak he designed himself as a gift for them. The couple put it on and begin to bicker.

Marinette enters the hotel to deliver the macarons to her parents who are catering the celebration. She passes by Adrien, Kagami, Tomoe, and the Gorilla and promptly trips. Kagami and Adrien rush to help her out. After the three of them deliver the macarons, Sabine asks Marinette to take the empty trays; Tom asks her to bring them some drink umbrellas; and Adrien asks if he and Kagami can help her.

As Marinette sets about her tasks, Adrien and Kagami have a mock fencing battle in the kitchen. Tomoe realizes that the children have been gone for a long time and sends the Gorilla to find them. He enters the kitchen; Adrien and Kagami hide; and Marinette innocently asks if he's looking for something. As Marinette starts to head back out to her parents, Adrien and Kagami convince her to escape with them. The three of them escape to the roof as Nathalie is sabotaging Chloe's bee signal. When the Gorilla comes up to the roof, Adrien grabs both of the girls' hands and jumps into the pool, which has been converted into a ball pit, with them. The three of them have fun in the ball pit. Amidst the fun, Marinette's hair comes out, and Adrien comments that it's the first time he's seen her with her hair down.

Nathalie sneaks to the stairwell and calls Gabriel, telling him phase two is complete. Hawk Moth sends an akuma to the Bourgeois couple.

Adrien starts playing piano on the roof. Marinette proceeds to put her hair back into pigtails when Kagami and Adrien tell her she looks beautiful with her hair down. The Gorilla comes back up to the roof, and Marinette uses her hair elastic to distract him. They then flee the hotel. As they flee, the akuma finds Andre and Audrey, which transforms them both into Heart Hunter, two headed monster who devours love. Chloe runs to the roof to activate her bee signal. After watching her leave, Nathalie transforms into Mayura. She hides on the roof and watches as Chloe discovers her sabotaged bee signal.

After running out of the hotel, Marinette, Adrien, and Kagami happen upon Andre's ice cream care and decide to get some ice cream. Andre proposes three options for the trio and then asks which ice cream combination they will be getting. Adrien and Kagami defer to Marinette's judgment who asks Andre if she can find a blend for the three of them. Andre says that while he can, too many flavors may throw off the balance of the ice cream. Marinette eventually decides on the first combination and leaves Kagami and Adrien to eat their ice cream together. Kagami asks Marinette to come with her, but Marinette denies the offer saying that she can handle it alone and leaves. Adrien comes back with ice cream and asks where Marinette is, to which Kagami says she is gone, much to Adrien's surprise and disappointment.

As Marinette walks back to the hotel, she breaks down crying and becomes heartbroken that now the one whom she loved has been loved by another. While heading back to the hotel, she sees Heart Hunter and transforms into Ladybug. Hawk Moth and Mayura watch the battle from a rooftop, hoping Ladybug will seek the Guardian. Ladybug summons her lucky charm and receives a carousel token, telling her to go to the merry-go-round. When she arrives, she sees Master Fu and then notices that Mayura has followed her. She takes off trying to ditch Mayura. When she thinks she has, she returns to the merry-go-round. Master Fu points out that she didn't transform back, but she assures him that she wasn't followed. She takes the Dragon Miraculous. After she leaves, Hawk Moth confronts Fu, much to the latter's horror.

Ladybug gives the Miraculous to Kagami, who laments that she is afraid to hurt Marinette, who is the only friend she has. She is afraid to hurt her if she'll ever pursue Adrien. Kagami explains that she and Adrien are made for each other and she will not let him go, even for the sake of friendship. Ladybug realizes she feels sorry, disappointingly tells that making choices is hard, as Kagami says that they have a job to do as the girls then transform.

Back in Place Des Vosges, Hawk Moth throws Fu to the ground, takes Miracle Box, and asks Fu who Ladybug and Cat Noir are and he'll leave him alone, but Fu refuses and the old man transforms into Jade Turtle (despite Wayzz's reluctance and objections to his master due to his old age) and prepares to battle Hawk Moth. Jade Turtle starts mocking Hawk Moth for being unsuccessful in getting the miraculous, which makes Hawk Moth angry enough to attack him as Jade Turtle fights Hawk Moth. He actives his Shell-ter, and Hawk Moth and Mayura double team him, causing his shell-ter to crack.

Chloé is still on the rooftop in patiently waiting for Ladybug, until she sees that Ladybug already has an ally, becomes upset over the decision. She insists that she needs to save Heart Hunter, because they are her parents.

While Ladybug, Cat Noir, and Ryuko fight Heart Hunter, Chloé becomes furious and throws her bee signal off of the roof, losing her hope. Much to her surprise, Hawk Moth arrives and tries to convince Chloé to join him. Chloé is reluctant at first, because he is the one who akumatized her parents. Hawk Moth asks what Ladybug has done for her, since Chloé was the one who trusted Ladybug the most as a fan. Chloé decides that Ladybug doesn't trust her to be the holder of Bee Miraculous, she joins the dark side and finally agrees. Chloé tells Hawk Moth that he'll wear Bee Miraculous, but in case, if Hawk Moth de-akumatizes her parents first. Hawk Moth accepts these conditions.

Ladybug summons her lucky charm. As she comes up with her plan, Hawk Moth de-akumatizes Heart Hunter. Ladybug and Cat Noir save André and Audrey, and Ladybug uses her Miraculous Ladybug to restore the city. Ladybug, Cat Noir, and Ryuko are confused when Heart Hunter becomes de-akumatized by itself. Hawk Moth akumatizes Queen Bee into Miracle Queen. While this is happening, Kagami gives Ladybug back the miraculous. Once she leaves, she transforms back into Marinette and she goes to find Fu to give him back the miraculous, but, much to her shock, Fu's gone. She becomes worried, but Tikki tells her not to worry because Master Fu is very wise, he can be anywhere.

Meanwhile, Adrien finds Kagami and asks what happened. Kagami says that Ladybug took her away because the villain was going after people who were in love. The two begin to kiss.

Back with distraught, Marinette leaves the park. Luka finds her and asks if she is okay. Marinette breaks down crying, explaining that she is "tired of putting up a front all the time". Luka sympathetically walks over and comforts heartbroken Marinette.