Hawk Moth's lair is a room or observatory located inside the Agreste mansion. Here, Hawk Moth stores many white butterflies that, once corrupted, become akumas, which he uses to akumatize his victims.

In "The Collector", the lair is revealed to be connected to Gabriel's atelier in the Agreste mansion by a pathway. In the portrait of Emilie Agreste, there is a pattern of buttons Gabriel presses to get to the lair.

The room is large, dome-like, and dark when Hawk Moth is not using an akuma. It has a large window with a butterfly (or flower) design that opens whenever Hawk Moth plans to send an akuma to a person who feels strong negative emotions. In the back of the room, a circular shape is on the ground, which Gabriel stands on to travel between the Agreste mansion and his lair.

Once a villain gets defeated, the window closes, encasing the room in darkness once again.

Gabriel standing on the circular shape 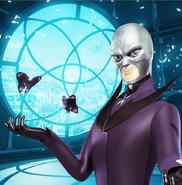