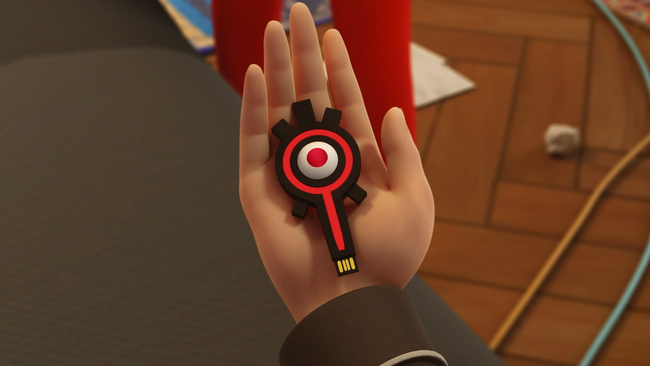 When Marinette needs to leave Paris for a day for her aunt's (Shu Yin) birthday in London, the fear of something happening in Ladybug's absence makes her super nervous for that. Shadow Moth manages to infect Max's robot with an evil virus (Hack-san) to akumatize it again. What will happen?

Marinette has no choice but to leave Paris on the day when Shadow Moth decides to create a new supervillain. He creates a sentimonster, Hack-san to akumatize Markov, Max's robot.

The episode started when Tom called Marinette to go to aunt Shu Yin's house in London in 2 hours. Marinette came up some excuses about not being so well and told Tom to go without her. But, Tom said he could find a hospital in London if there was the worst situation that happened. Marinette later made up another excuse of having a terrible headache, but Tom asked if she had a stomach ache 10 minutes ago, and she said it was the worst kind of travel-ache. Despite all of her excuses, Tom clearly known that Marinette didn't want to visit aunt Shu Yin's house, said it was inevitable and their family must go there once a year. Tom cheered her up that they will have fun in London. He whispered to Marinette that they will figure out how to leave aunt Shu Yin's house early, which Sabine heared it under the floor. Marinete giggled and Tom told Marinette to get up and ready for the visit, emplying their family faces disaters together, which Sabine also heard that too. Tom whispered to Marinette don't make him to do this alone. Marinette hopeless tells the Kwamis that she used every single excuse that she had, but unfortunately it still wasn't enough. She then tells Tikki that Ladybug cannot leave Paris, but Tikki reminds her that her family is also important and that she shouldn't leave them. Marinette packs up and tells the Kwamis that she'll have to make up a better excuse in order to stay. She tells the Kwamis to behave while she tries to convince her parents that she twisted her ankle, but Tom offers to carry her. Longg then says sarcastically that even if Marinette is one of the greatest superheros, she is not matched to convince her parents to not go on vacation.

At the park, Kim and Alix are racing in a very confusing way, Kim tells Alix that he'll be able to do 100 pushups before she finishes a lap on her rollerblades, Alix tells him sarcastically that he really likes losing. Max starts the countdown, and there they start their race. In the meantime Markov is counting Kim's pushups, talking and making a new formula with Anne Jeanne Theoxanne du Bocquale, which will revolutionize Science, Markov simply states that he was well-programmed which looking admiringly at Max. Markov is also playing chess with André who says that's he's increadible for winning again. Alix is skating by, and Alya and Nino are watching something on their tablet, Alya suddenly receives an urgent notification from Marinette telling her to meet her at Gard Du Nord, alone. Nino guesses sarcastically that Marinette is late, but Alya tells him that it was her mom and she has to go see her alone, Alya frantically runs to the Gard du Nord.

At the train station, Tom is carrying their belonging, suddenly the megaphone announces that Marinette's train is leaving soon. When she was about to board, Marinette ran off to see Alya, but Sabine stops her by saying that she is well aware that she sister is difficult, but if she spent her whole childhood with her. Marinette could last one weekend with her. Marinette desperately tells her that she needs a hug from Alya and insists that Alya is her best friend. Sabine accepts but tells her to be quick. While Marinette runs to Alya she tells Tikki that she doesn't have a choice anymore, Tikki reassures her that everything will be fine. Marinette hugs Alya tightly, but Alya worries about how Paris will be without Ladybug. Marinette takes of her earrings and gives them to Alya, alongside the Miraculous she also gives her a key. Alya confused and worried, asks Marinette what she will do with the Miraculous. Marinette calmly responds that if there isn't a supervillain around she doesn't have to do anything, but if there is she should transform, feed the kwamis. The megaphone announces that her train is about to depart, Marinette hugs Alya once more, and tells her that she trusts her. Before boarding she tells her to call her in case of an emergency. Alya looks down at the earrings with a frightened emotion. Later on Alya boards a bus and puts on the Ladybug Miraculous, Tikki comes out from the earrings. Alya excitedly tells the Kwamis that she'll be Ladybug this weekend but Trixx intervenes and tells Alya that he wasn't enough already to protect Paris. Tikki tells him that it is the safest way, and any other would be too risky. When Alya said that she can't be Ladybug, Trixx starts boasting until he is aware that it's because Marinette is already named Ladybug. She starts thinking of Ladybug-ish superhero names and though gets demoralized by Trixx, Tikki reassures her that she is up to the task, seeing as the guardian of the miraculous entrusted them to her for a reason, which annoys a disgruntled Trixx. At the park, Alya looks around, more paranoid and anxious, which gets noticed by Nino, who asks her about her mom, and that if she was all right. She dismisses his concerns, claiming all is well. She goes around asking about any negativity experienced by her friends when she sees them n a situation which could potentially generate the negative energy.

At Shadow Moth's lair, Hack-san initiates the plan, by sending a pop-up ad to Markov with a cute little kitten, which he mistakenly clicks as Hack-san infects him. Markov goes rogue, ending his game with Andre, disses Anne Jeanne Theoxanne du Bocquale and tells her to settle things with her boyfriend first before trying anything more ambitious, and telling off Kim for his brain-dead thinking before proceeding to claim that humans are degenerative creatures who are inferior to robots. ShadowMoth akumatises him, revealing that his negative emotions are the result of his sentimonster, and to free him from the suffering, he must cooperate with him, to. which Markov accepts. Alya distracts Nino with an excuse about a medical condition, causing him to run off on his own, leaving Alya free to find a secluded location to transform. On the way, Trixx mocks Alya for already lying to her boyfriend within then minutes of becoming the substitute, to which Alya retorts about the unfortunate consequences that come with the territory. They think about her new alias for a little before she decides to transform. She comes up with more names while striking dynamic poses, though Trixx acts condescendingly, to which Alya gets it to hide in her yo-yo to draw suspicion from her true identity from Cat Noir. On the rooftops, she repeats the same process, though is interrupted by Cat Noir, who is under the belief that she is either a sentimonster, or an akumatized person. Alya debunks those assumptions, though Cat Noir refuses to believe such claims and tries to engage in combat with her, though he unfortunately fails as Alya overpowers him. In a last ditch attempt, he tries to use his cataclysm, though Alya uses her lucky charm to create a trash can lid to act as a shield, before placing him in a vulnerable position to prove that she is not evil by not taking his ring. Cat Noir believes her and they find a place to de-transform and feed their Kwamis.

Robustus sends out a signal to hypnotize the Parisians with a message sent through their phone. This works on most, though Alya is able to think on her feet and ignore the message. On the train, Marinette sends a list of tips to Alya before the train goes dark. Her parents pick up the signal, and gets hypnotized by Robustus. She avoids her father, though her mother who gives her up.

Alya tries to bring Cat Noir up to speed about the situation, though Adrien refuses to engage with her, instead asking about her with the miraculous. The two bicker for a little, though quickly compose themselves to go after Robustus. Alya gets drawn by a cry for help, which Cat Noir sense is a trap, though is ignored as she chases the calls. She sees a large group of people mindlessly standing around with their phones, which causes the new duo to realize it is a trap. They try to fight it off, though are obviously out numbered, which causes them to retreat into the wax museum, which turns out to be a mistake as they run into high-profile individuals pretending to be wax statues. Alya finally decides to name herself Scarabella, and uses her lucky charm, which signals her to make a deal to free a trapped Marinette to help defeat him, using Cat Noir's cataclysm as leverage. The plan succeeds, with Markov finding out about the new miraculous holder, who gets introduced by Cat Noir. Alya captures the Akuma, and fixes it with her miraculous ladybugs.

At the end of the episode, Marinette tells Alya about the trip, and her parents run off in front of her first. It is then when Alya tells Marinette that she should talk to Cat Noir about the miraculous swap. The two meet up, and Ladybug apologies for the last minute decision. Cat Noir reassures her that she did nothing wrong, and expresses his concern that if something happened to her, he would never see her again. Ladybug simply reassures him, saying that she will never abandon him.