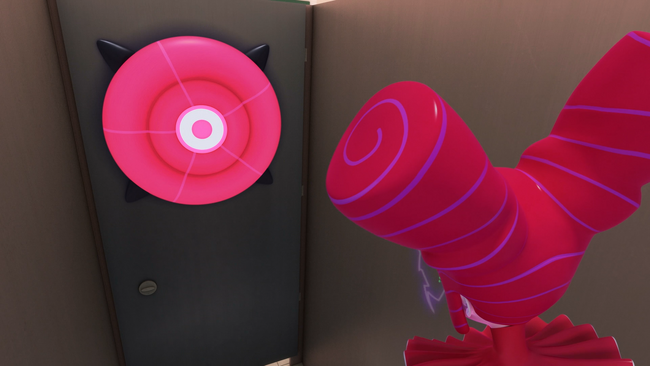 When Reflekta becomes entangled in a bottomless abyss of guilt, Ladybug calls an ally for help with unshakable optimism.[3]

The episode starts with Miss Bustier writing on the board as the class do their own individual activities. Suddenly, Rose gets a headache and asks Miss Bustier if she can go to the nurse. Miss Bustier replies saying that they can't keep Miss Heady waiting and asks Marinette to take her to the nurse. As she accompanies Rose, Marinette asks who is Miss Heady, and if she is an imaginary friend like Lily the Unicorn Rose had in sixth grade. Rose says Heady is a nickname she gives when her head is hurting and that reminds her to never leave Mr. Brekkie, who is the most important snack for her health. Marinette replies saying she loves how Rose can see the world with rose-colored glasses, and tells her to get to class when she can and not to forget to greet Sissy, who she jokingly says is the nurse. Rose laughs and says not to worry as she won't never take too long with Sissy and enters the nurse. Marinette returns to class and says everything is fine with Rose, while Juleka looks worried.

At lunch, when Juleka was about to eat her meal, she gets a message from Rose. When she first reads it, she's shocked at what she sees and puts her phone down. Noticing this, Marinette tries to help her and says that if Juleka skips Mr. Mealy, an energy packed lunch, Heady might have to visit her too. Juleka then runs off crying with Marinette thinking she offended her, saying it was a joke. Juleka goes into the school's basement, while Marinette is calling out for Juleka, searching for her. Shadow Moth feels Juleka's negative emotions and sends out an akuma to evilize her. Adrien enters the school and bumps into Marinette while she was looking for Juleka. Marinette apologizes and stutters, trying to explain that she is looking for Juleka and that after she joked around with her in the cafeteria, she ran off crying. Adrien points his finger to the school basement, suggesting that she might be in there.

They go in, but Marinette accidentally trips on Adrien, but is quickly held back from falling on to him. She stutters saying that she is worried about Juleka and that she was a fool because she didn't know if Juleka was upset about something she had said. Adrien clarifies that although not all things she says makes sense, they're never mean, and there has to be another reason and goes back to looking for Juleka. Sure enough, the two find Juleka crying. As Adrien attempts to re-assure to her, Marinette texts her classmates that Juleka was in the school's boiler room, and they immediately rush over.

Marinette apologizes to Juleka and asks if she upset her. Juleka clarifies that she is merely worried about Rose. Marinette is confused, and she brings up the fact that Rose was okay and she just went to get some rest in the nurse's office. She encourages her to tell her anything and promises she won't tell anyone because they were her friends. Juleka gets her phone out and shows a picture of Rose in a hospital bed. When her classmates arrive and are horrified by this. Juleka explains to them that Rose became quite sick when she was little, and the illness can return at any unexpected moment. Nino says that Rose has always been so bubbly and happy that they never would've thought of something like this happening to her. Juleka also explains that she promised Rose she wouldn't tell anyone, and begs them to not tell her that she told them. Her classmates are very understanding, with several of them admitting that the secret is safe with them. Adrien reaches out his hand to Juleka and says that it's okay that she kept this a secret, but it was too sad of a secret for her to keep it to herself. Juleka thanks them and Marinette says that's what friends are for. All of Marinette's classmates present hug Juleka, causing the akuma to fly away.

The next day, Juleka is ecstatic to see Rose again, hugging her when they first meet up at the subway. When the two reach the school, the two notice that the students are being way nicer to Rose than usual, as a result of the class finding out about Rose's condition. While Rose is confused, Juleka is irritated as the class is showing no effort to hide it. Eventually during lunch, Rose realizes Juleka has something to tell her, so the two head to the bathroom to discuss. Here, Juleka confesses to Rose that she told the class about Rose's condition. Rose is initially worried as it means nobody would treat her the same way again, but upon noticing Juleka's guilt, she immediately stops that and tells her she shouldn't have put a burden like that onto her. After the two exit, the whole class is present, and the class agrees to act normal towards her.

However, that changes in Ms. Mendeleiev's classroom, where everyone is learning about diseases. Rose sneezes in the middle of the lesson, which causes the class to panic. The class is debating on whether or not to call an ambulance, until Rose snaps and reminds the class to remember the promise they made. This makes Juleka's guilt resurface, and she runs off to the bathroom to lock herself in a stall. Rose quickly runs after Juleka. Shadow Moth, sensing Juleka's pain, charges both an akuma and amok and sends it after her.

In the bathroom, Rose begs Juleka to open the door, telling Juleka that it wasn't her fault. Juleka skims through her text messages that her classmates have started sending her, and comes to the conclusion that she is the reason everyone is feeling guilty. Rose tries to convince her otherwise, but stops when she notices the akuma and amok. The amok enters Juleka's phone while the akuma enters her right lace glove, turning her back into Reflekta and summoning a sentimonster, Guiltrip. Reflekta, still feeling immensely guilty, allows herself be absorbed by the sentimonster, to Shadow Moth's horror.

Meanwhile, Rose bursts back into Mrs. Mendeleiev's class, telling everyone that Juleka is on the verge of akumatization and she needs their help. Despite Mrs. Mendeleiev's objections, everyone in the class, except for Chloé, Sabrina and Lila, quickly rush to the bathrooms. While everyone else is investigating, Marinette gets into a locker and Adrien goes to the boys bathroom, and the two separately transform into Ladybug and Cat Noir. In the girls bathroom, Ivan manages to get the door open, but this causes the entire class to get absorbed by Guiltrip, including Ladybug and Cat Noir.

Inside Guiltrip, the duo realize that the bubbles are causing the victims to succumb to their deepest guilts, and when they're fully enveloped, the victims turn into Reflekta copies. When Cat Noir sees Nino feeling guilt for not being able to help Adrien step up to his father, it causes him to feel guilty as well and bubbles begin to envelop him. Ladybug eventually begins to stress, causing the bubbles to come close to her too. Cat Noir summons Cataclysm and attempts to use it on himself, but Ladybug stops him in time. However, knowing the odds are against them, the two give up.

Soon after this, Rose shows up, and is excited that Ladybug and Cat Noir have arrived. Noticing their their immense gloom, she begins to feel saddened as well, but due to her positive outlook on life, she manages to repel the bubbles. This gives Ladybug an idea on how to resist, telling Cat Noir why he is the best partner she could ask for, snapping him out of his despaired trance. Now knowing the two can defeat Guiltrip, Ladybug summons her Lucky Charm, which is an ice axe. Ladybug looks around and can't seem to find what to do with it. Seeing that the two are slipping back into gloomy moods, Rose begins to cheer them on, knowing they'll save Juleka. Ladybug now knows they'll need more positivity to save the day, and gives Rose the Pig Miraculous. Rose and Daizzi are both delighted to meet each other, and Ladybug tells Rose the transformation words. She transforms into Pigella, a pig-themed superhero.

Now that the three are ready for action, they begin to swim through Guiltrip to find the real Reflekta. The trio eventually find her surrounded by countless bubbles, constantly belittling herself for making her class feel guilty. Pigella uses her superpower, Gift, in order to show Juleka/Reflekta her biggest desire: a normal day in class with nobody overreacting to Rose's condition. This gets rid of all of the bubbles surrounding Reflekta, and allows Cat Noir to use his Cataclysm on her wrist mirror. Ladybug captures the akuma, resulting in Reflekta turning back into Juleka.

The class has now entirely turned into Reflektas, and are after Ladybug and Cat Noir. However, Pigella fights back in order to not get zapped, and then says that what matters is to find a solution rather than fight. With this in mind, everyone begins to swim their way out of Guiltrip, but the winds make it extremely hard to do so. Ladybug uses the ice axe to cling to the walls and climb, and eventually get back into the bathroom. She finds Juleka's phone, smashes it with the ice axe's blade, and captures the amok. She then gives Juleka a Magical Charm to protect her from Shadow Moth's future attacks.

Ladybug then uses Miraculous Ladybug, turning the students and Ms. Mendeleiv back to their regular selves. Rose thanks the heroes for saving Juleka, sneaking the Pig Miraculous into Ladybug's hand in the process. When the two heroes leave the school, Cat Noir notes how Rose will not need superpowers to be a hero until Ladybug needs her.

After the whole ordeal is behind them, Marinette starts to undo all of the chaos she did at the beginning. When Rose and Marinette begin to joke around with her condition, the entire class knows that everything will be alright in the end, with the two's performance causing everyone to laugh. This causes Chloé to curiously ask why nobody laughs whenever she says something mean, and Adrien retorts that it's because she always means the harsh comments she says, which causes the class to laugh again. Rose, glad to have her old friends back, says the class will always be like this, ending the episode.