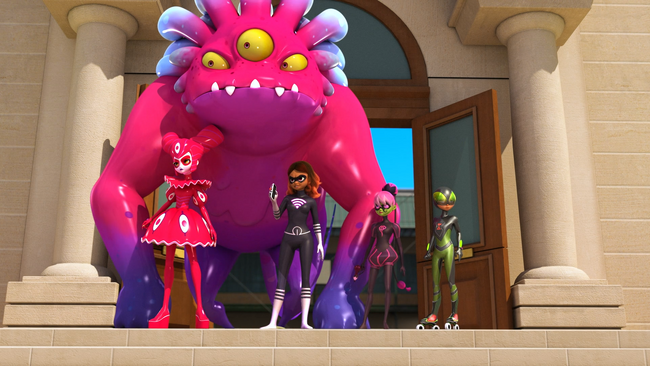 Marinette's friends get akumatized into the Gang of Secrets, a team of supervillains determined to save her.[4]

The episode starts with Ladybug and Cat Noir already defeating a villain. As Cat Noir tries to initiate a "pound it" with Ladybug, he notices her looking distracted and troubled. After he asks Ladybug if something is wrong while calling her "bugaboo", she ignores Cat Noir's question and completes the "pound it" without scolding him for calling her "bugaboo" to which Cat Noir notices as unusual behavior for her. She then swings to the top of the building and suggests an extra patrol to which Cat Noir objects and asks her to tell him what's going on while noting that Ladybug didn't even react to him calling her "bugaboo".

Instead of telling him about her burden of having to constantly keep secrets from her loved ones and about her heartbreak due to recently breaking up with Luka prior to this episode, Ladybug makes an excuse that she has some extra time left but doesn't feel like talking. Cat Noir then tricks Ladybug into going on a theater date with him. Ladybug becomes even more upset by the movie since it reminds her of her current love situation. As Cat Noir is about to put his arm around Ladybug, she finally explodes and starts ranting about how the movie is unrealistic and lame and unwittingly rants about her own love situation much to the complete shock of Cat Noir and the other people watching the movie. Cat Noir is forced to escort Ladybug out of the theatre and keeps apologizing to the people they pass while Ladybug keeps ranting.

Once out of the theatre, Cat Noir admits that while he did not understand everything in her rant, he figured out that she is heartbroken and attempts to get Ladybug to talk about her love problems. Ladybug cuts him off and attempts to hide her broken heart from him by pretending to be excited and tells him that she wants to go swimming. However, Cat Noir does not fall for this act and reminds her that he's always here for her if she wants to talk about her troubles. Just as Cat Noir finished his sentence, Ladybug swings away from him while pretending to cheer in joy which leaves Cat Noir looking sad and worried for his partner. The Kwamis then see Marinette coming back home in her Aquabug suit asking her what’s going on.

Alya then goes on the roof to go find Marinette. Marinette then comes on her bed as Ladybug with Alya almost seeing her, just in time to de-transform. Marinette then sees Rose touching her dollhouse and quickly jumps in front of her, causing Rose to drop the roof of the dollhouse, breaking it. Rose apologizes, and Alya asks to know what is going on. Marinette lashes back at them for sneaking into her room and says that she doesn’t want them as her friend anymore, leaving them heartbroken. They go to the park to discuss, and in their sadness, get akumatized by Shadow Moth after the akuma lands on the friendship bracelet that Alix was holding.

Marinette throws away the doll house and creates a sewing box that can safely hide the miracle box. However, she sees Lady Wifi break into her room. Trixx, in an attempt to help Marinette, uses an illusion to make Marinette run all the way to the Collège Françoise Dupont just in time to lose them, allowing Marinette to transform into Ladybug again. Meanwhile, Adrien and Plagg then see the Eiffel Tower doing a weird dance, with Plagg suggesting that Trixx had done it. Adrien then transforms into Cat Noir to help Ladybug defeat the villains. The villains then break into the school threatening all of the students and the teachers just in time for them to go track down Marinette. While Cat Noir is running on a rooftop, he witnesses Princess Fragrance flying in the sky with her perfume, hides behind a wall, and contacts Ladybug. Ladybug then explains the situation and tells Cat Noir that she is gonna capture one of the akumatized villains to find out where the akumatized object is.

Ladybug notices Lady Wifi jumping on buildings and then captures her, convincing her to reject Shadow Moth’s akumatization, and causes her to return to normal. Ladybug compliments Alya for rejecting akumatization as nobody has ever done it, and gives her the Fox Miraculous to transform into Rena Rouge, which will help Ladybug and Cat Noir fight the other akumatized villains. Ladybug then uses her Lucky Charm and summons a floatie. Rena Rouge then summons up her Mirage to make an illusion of Marinette, distracting the villains from taking Cat Noir’s miraculous. While Ladybug is fighting the villains, she gets caught by Horrificator but meanwhile, the Marinette illusion is running from Timebreaker.

Timebreaker chases the illusion of Marinette and just in time, Rena Rouge makes the mirage of Marinette disappear, causing Timebreaker to fall into the pool. Cat Noir, who is underwater in his aqua form, then puts a floatie on Timebreaker and cataclysms the friendship bracelet, causing Timebreaker, Reflekta, Horrificator, and Princess Fragrance to turn back into their civilian form with Ladybug using her Miraculous Ladybug. Rena Rouge turns back into Alya, gives Ladybug the Fox Miraculous, and they hug each other.

Back at Marinette's house, she then has a conversation with Alix, Alya, Juleka, Mylene, and Rose when she admits the breakup between her and Luka broke her heart. They forgive her, hug each other, and leave the room. Alya decides to stay behind to talk with Marinette about why she was acting the way she was. Marinette couldn't tell Alya what was in her heart, it's her right. she asked Alya if they are still friends so then she lets Alya stay with her. She breaks down about being lonely and having to lie to Alya, her other friends, parents, and breaking up with Luka and "drawing the line on Adrien." Alya makes Marinette relax, saying they are best friends. Marinette then reveals the shocking, exposing the truth to Alya that she is Ladybug. Alya, who is shocked, hugs Marinette, with the Kwamis looking on, ending the episode.