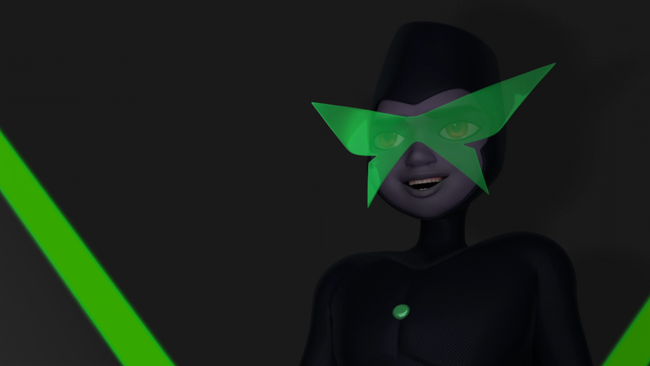 When he can't find anyone to test his video game that pits formerly akumatized villains against one another, Max again becomes one himself: Gamer 2.0.[6]

Max is akumatized into Gamer once again, and it's Ladybug and Cat Noir's second battle against him.

Marinette is stressed because she has a lot of work to do: study for her history test, design Kitty Section's shirts, and make a poster for Jagged Stone. Her father invites her to play Ultimate Mecha Strike III with him, and although Marinette really wants to, she turns him down since she has so much to do. Dejected, Tom asks Sabine why Marinette must grow up so fast, to which Sabine replies by saying that it’s a part of life. The two decide to play Ultimate Mecha Strike together.

The next day after finishing her history test, Marinette overhears Max talk about a new video game he designed and invites several of his classmates to test the game with him, though they each turn him down for various reasons. Marinette is intrigued by the game, but knowing that she still has a ton of other stuff to take care of, she stops Max before he can even ask her, stating that she must resist the temptation before futilely trying to explain why she can’t play with him. Chloé tells Max that the reason no one wants to play his video game is because everyone has a much more interesting life than him — even Marinette. Marinette says that she wasn’t just making excuses not to play with Max but has to take off before she can explain herself. Opening his locker, Max finds Markov and asks him if he’d like to play his new video game, but Markov turns him down since he’s communicating with artificial intelligences to find a solution to global warming. Upset that no one wants to play with him, Max is akumatized by Hawk Moth into Gamer 2.0 who zaps previously akumatized villains into his life-sized video game dimension. While fencing, Adrien notices Kagami and his fencing teacher disappear, so he runs into a bathroom stall and transforms into Cat Noir.

Just as Marinette finishes designing the new Kitty Section T-shirts, all her friends disappear. Gamer 2.0 then comes onto the screen and announces to Ladybug and Cat Noir that all the people who they’d previously saved are trapped in his game, and in order to save them again, they must play. Marinette transforms into Ladybug and meets with Cat Noir. Gamer 2.0 then provides each of them with their own pyra-pod. Cat Noir wonders if it’s a trap, but Ladybug assures him that he just wants to play. The two put on their earpieces to keep in touch and enter the pyra-pods, where they are flown into Gamer 2.0’s video game dimension.

Once inside the game dimension, they get their hands locked into place and are forced to use old akumatized villains to win a game that Gamer 2.0 created himself. In it, one of them, either Ladybug or Cat Noir, have to pick an old villain who will materialize in the fighting arena. Gamer 2.0 does the same. Once both of the villains are in the fighting arena, they fight. Regaining their old powers, the villains attack one another trying to throw their opponent out of the arena and onto the ground below or break their akumatized object. When a villain is defeated, control of the winning villain's akumatized item goes to the winner. Ladybug, impatient because of her multitude of responsibilities, throws herself into the game without thought or strategy and is easily bested until Cat Noir reminds her that the main point of a video game is to cut loose and enjoy oneself. With this in mind, Ladybug begins using more strategic moves and quickly begins to enjoy herself, particularly when she knocks Volpina out of the ring in one move with Evillustrator's powers. Once all of the villains are defeated, Ladybug and Cat Noir must face each other to find out who will fight Gamer 2.0. The round begins, but neither of them move. They know what will happen if either of them lose their miraculous to Gamer 2.0. Then suddenly, Cat Noir walks backwards and purposely jumps off. While Ladybug is horrified, he calls out to let her know that he trusts her and knows that she will restore his Miraculous along with all the other people in Paris.

With just Ladybug and Gamer 2.0 left, Gamer 2.0 lets Ladybug pick four of the defeated opponents' objects/powers. She calls on her Lucky Charm and receives a bag of flour. Once she figures out what to do, she chooses Sandboy's Pillow, which lets her float in the air, Troublemaker's Pen, which makes her intangible, Volpina's Flute, which creates illusions, and Cat Noir's ring, which has the power of Cataclysm. She enters the fighting arena, and the final round begins. Ladybug cataclysms the arena and then jumps onto the floating pillow while Gamer 2.0 changes into Befana and rides her floating motorcycle. He shoots at Ladybug, but she makes herself intangible. Gamer 2.0 changes into various villains to try and hit Ladybug, claiming that her staying intangible is not fair and no fun. As Ladybug's earrings start to beep, she comes tangible and breaks open the bag of flour to give her cover to create many illusions of herself. As The Dark Owl, Gamer 2.0 quickly disposes of the illusions and then Ladybug herself. Ladybug falls to the ground and discovers that she's still on the ground saying that the game has a bug. As Reverse, Gamer 2.0 floats down to the ground to investigate. When he touches the ground, he suddenly changes back into Gamer 2.0, discovering that the Ladybug that hit the ground had been an illusion. Ladybug is declared the winner, and Gamer 2.0 gives her his glasses. She breaks the glasses, restores the city, and purifies the akuma. Hawk Moth assures himself that he'll be successful next time.

Ladybug and Cat Noir meet on a rooftop. Ladybug asks Cat Noir how he balances everything and if he's worried that he'll have to sacrifice everything for being a superhero. Cat Noir replies that his favorite moments are when he's with her and that he would give up everything for that.

Marinette introduces Max to her parents telling them that he's created a video game that has bugs to find. Tom and Sabine excitedly grab Max and drag him up to the living room to try his new video game. Tikki floats out, and Marinette says that the Kitty Section T-Shirts are almost done and then asks if the Jagged Stone poster can wait a bit. Tikki reassures her that it can, and Marinette races up to the living room to test Max's new game with her parents.