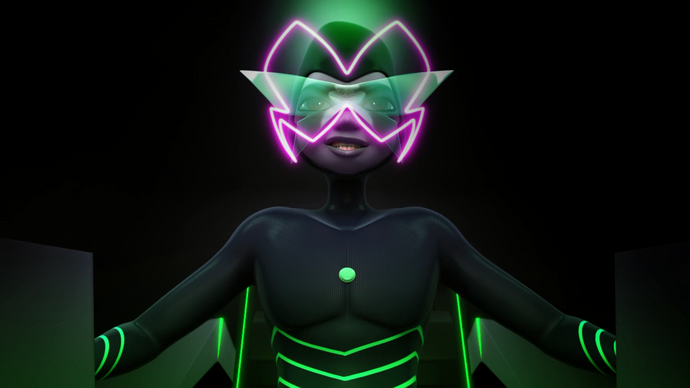 Marinette beats Adrien's video game tournament partner, Max, so she can replace him and spend time with her crush, but Max akumatizes into a villain.[5]

Marinette is writing in her diary, discussing how Cat Noir almost discovered her identity in an attack earlier that day. Tikki stops her, reminding her about a presentation she has to do with Alya. Marinette grabs her phone, puts her diary away, and leaves her room, heading to the school.

She enters the school's courtyard, hearing a noise coming from the school's library. Marinette goes to investigate, finding Juleka, Alix, Mylène, Alya, Miss Bustier, Mr. Damocles, Rose, Kim, Nino, Nathaniel, and Ivan watching Max and Adrien play the game Ultimate Mecha Strike III. Adrien's character is NAD03, and Max's is MX-01. Since Marinette has no clue as to why they're playing a video game, Rose cuts in and explains it to her: there's a video game competition between schools. Kim says that the qualifying round happening in the library is to determine who is to be partnered with Max since Max has been practising for months.

NAD03 defeats MX-01, making Adrien the number one player in the school and Max's partner. Everyone cheers, except for Max, although, instead of brooding for long, Max congratulates Adrien and looks forward to their partnership. Marinette thinks for a moment, realizing that whoever beats Max's score will become Adrien's partner. Alya pulls Marinette to the side, telling her not to try to beat Max and not to flirt with Adrien. Marinette ignores her, asking Mr. Damocles if she can participate. Mr. Damocles mentions that the library is closing in five minutes, but Marinette persists, sitting on a chair in front of the screen.

Adrien gives her his controller, which she promptly puts up against her face before lowering it hastily. Kim doesn't believe that Marinette can beat Max, but Alya responds that she's motivated to beat Adrien's high score. Max tries to explain the rules of the game, but Marinette cuts him off, explaining the rest of the rules. They shake hands after a brief flashback to Marinette destroying her father at the game while at their house. Chloé and Sabrina stand on the second story of the library, watching and wondering how someone could spend so long looking at a screen. They then pick up their phones and scroll through social media.

Alya records the match. To everyone's shock, Marinette defeats Max and becomes the 1st place winner. Max becomes disappointed because it was his dream to play the competition and he lost his spot, but tries to be a good sport and congratulates Marinette before he walks off, needing to be alone. Mr Damocles congratulates Adrien and Marinette on being the team to go up against the competing schools. Adrien says that he will come over to see her level after school. She is unfazed by what he says and totally disregards Alya's warning.

Max, on the other hand, is angry over losing to Marinette. Hawk Moth senses this anger and sends an akuma out. The butterfly landing on his glasses, Hawk Moth greets Max as "The Gamer," promising to help Max win the tournament of his life so long as Max helps him in return. Max immediately agrees, transforming into The Gamer, surrounded by the walls of his real-life MX-01 mecha.

On their way home, Tikki asks Marinette why she wanted to participate in the tournament, pointing out that there are other ways to gain Adrien's attention and that her selfishness denied Max his spot in the tournament. Marinette cedes that she was wrong, but focuses on the fact that Adrien's coming over to her house. She then pauses and freaks out, realizing that Adrien will be in her room, her room full of pictures of him. She rushes home and realizes she has time before he gets there. Immediately as she says this, the doorbell downstairs has Marinette and Tikki rushing to get rid of the pictures.

Meanwhile, inside of his MX-01, the Gamer floats around the streets of Paris shooting at the pedestrians and cars. Each thing he shoots transforms into experience points.

At Marinette's house, Adrien stands at the foot of the stairs, speaking with Marinette's parents. He explains that he and Marinette are going to be participating in Ultimate Mecha Strike III tournament. Tom mentions that she trained with the best, but Sabine mentions that Marinette has never discussed an interest in the tournament. She then says that Marinette talks about Adrien quite often. Adrien is surprised by that tidbit but doesn't linger on it as Marinette steps out of her room to lead him upstairs. Both Tom and Sabine sigh contentedly as they watch them.

When Marinette and Adrien first get upstairs and sit down at Marinette's computer, they both end up reaching for the same controller and pulling back when their hands touched. It happens again making it awkward in the room. Adrien finally grabs one and Marinette the other. They start playing in silence for a while, occasionally taking short glances at each other.

Outside in the streets, The Gamer continues shooting pedestrians from inside his MX-01. Soon he gains enough experience points to transform the mecha from Level 1 to 2 and gains legs. The mecha now towers over the roads.

Back at Marinette’s place Marinette and Adrien are still playing the game. After just a few minutes of playing her dad brings croissants. Adrien, ready to eat one, can't get a word out when Marinette quickly shoos him away claiming they needed to practice for the competition. They continue playing as Marinette's parents both poke their heads up and she turns giving them a stern look turning around right when Adrien turns to see what's going on. A second later her dad comes back offering cookies. Marinette shoos him away. They take a break and Adrien starts claiming she is way better than him.

Marinette tells him she has a secret. She shows him a bracelet, calling it her lucky charm, to his surprise. He takes it and just then her parents offer quiche Adrien tells Marinette it is okay to take a little break. They travel to the Place des Vosges. When they get there Marinette suggests they go back when done eating. Adrien says he'll try out the bracelet. Before they get a chance to leave the Gamer shows up and tries to come after her. Adrien knocks her out the way and they continue running. They are split by a bench and run their separate ways.

Adrien, knowing he is the one not being chased, goes and turns into Cat Noir to go rescue Marinette. He makes it right before she is hit and saves her. When he disappears she turns into Ladybug after being reminded by Tikki. She gets there just in time to stop him from shooting Cat Noir.

They run him to the Parc des Princes. where Cat Noir uses Cataclysm to destroy the Gamer's robot and they are rewarded with an energy orb. But the Gamer reveals that he had "saved the game" after reaching Level 3 allowing him to simply reload to recreate his mecha.

Cat Noir and Ladybug obtain a robot from the energy orb they won and have a fight. With neither side winning, Ladybug uses her Lucky Charm and gets a spray paint can. She sprays Gamer's window with paint, causing him to peek outside. She snatches his glasses and breaks them. She catches the akuma, changing it back into an average butterfly, and she uses the Miraculous Ladybug to turn everything back to normal.

At the competition, Marinette decides to give her controller to Max, considering the fact that she only wanted to enter the tournament with Adrien because all that she can think about spending time with him. Adrien then gives his controller to Marinette, explaining that she is much better than him. In the end card, it shows they win the game.