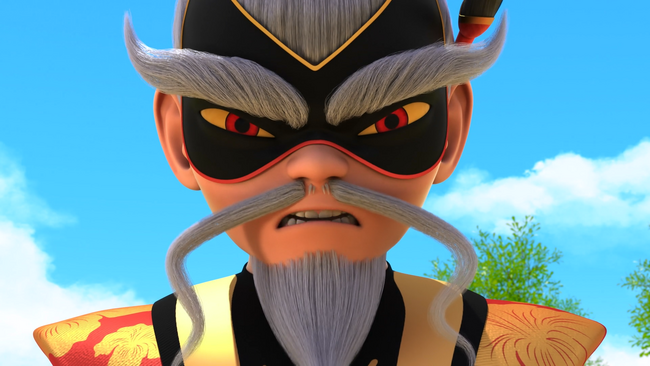 Ladybug and Cat Noir face someone they know well, and never imagined they would have to fight someday.[4]

The episode starts with Marinette talking to the kwamis telling them they can't come with her to visit Master Fu. The kwamis start to get so upset and say it's not fair and demand a reason, Marinette tells them now that she is the guardian, and that Master Fu can't find out about the kwamis since he lost his memory. The kwamis said they at least want to check up on him to see if he's okay. Marinette tells them that can't happen, as there must be somonene to guard the miracle box. Trixx gets the idea that if one kwami stays that means the rest can go, Marinette disagrees but the kwamis ignore her. Sass, Xuppu, and Daizzi then decide to play Kwami-Kwa-Who, Mullo is the picker and lands on Marinette, so they all try to go through her window, but Marinette gets in their way and tells them that since she's the guardian she gets to choose who stays. Barkk answers while watching a movie on Marinette's computer that she'll stay in case a sentimonster and/or akumatized villain shows up. Marinette thanks Barkk for staying.

Marinette visits the metro station waiting for Fu, the kwamis start to sing saying “Master Fu”, Marinette then takes her phone out of her bag and says the phone must have turned on by itself again to avoid suspicion. A mysterious man hiding in the trash can was suspicious about Marinette. Fu then arrives with Marianne. Marianne tells Fu that this is the girl who saved him from the boat accident. Fu thanks her for saving him and they all go on a bench to have a snack. Fu tells Marinette his time in London has been wonderful and Marianne tells Marinette that he discovered a passion for painting. Fu then hands Marinette a painting. Marinette asks if she is holding it correctly Fu says yes and that he also doesn't know what it represents, Wayzz then gets out of Marinette’s bag and crawls on the floor so Marinette tries to grab him. Fu notices Wayzz on the ground and asks if he is one of the dolls from Marinette's collection, Marinette says yes and that it probably fell out when she took the cake. So, Marinette puts Wayzz in her bag, Wayzz then exclaimed in joy. Marinette even says that the toy talks, she takes Wayzz out of her bag, squishes his head, and says "he touched me, he touched me", and tries to copy Wayzz's voice.

Marinette then goes to her room and finds the same man from earlier there holding the Miracle Box and Barkk, she starts to get scared not knowing who he is. The monk asks her how she has the Miracle Box, then Marinette asks who he is without answering his question. Tikki says he is the celestial guardian Su-Han, and that he was responsible for the box before the incident with Master Fu happened. Marinette asks him how he found her; Su-Han says that guardians' staff are equipped with a compass that can track down the miracle box. Marinette asks why she doesn't have one. Su-Han says that she is not a proper guardian and that the improper form of the box proves so. Marinette then says the Master Fu made her the guardian, which Su-Han gets upset with, by saying Master Fu never met any of their requirements to be a guardian. He then notices a few kwamis were missing and got even more upset to learn that Nooroo and Duusu were lost. Then he asked where Plagg was, and Marinette said that Cat Noir was his owner, but didn't know who he was, resulting with Su-Han learning that she wears the Ladybug Miraculous. He then says that Guardians aren't allowed to wear a Miraculous and forces the kwamis to return to the Miracle Box. He then tells Marinette which rules of the Order she broke and said she and Fu shouldn't have been Guardians. Then, in Marinette's computer, on the show that Barkk was watching about the knight, he was threatening to hurt a person in front of him. Su-Han says he accepts his challenge and tries to attack the knight who was actually in a computer. Marinette gets in his way and tells him to calm down, Su-Han then realizes the knight is stuck in a thin glass. Marinette then transforms into Ladybug and uses her yo-yo to talk with Cat Noir and tells him to meet her. Su-Han asks Ladybug what she is doing with her weapon, and she says she's using it to contact Cat Noir. Su-Han is surprised that they don't send doves to communicate anymore.

Su-Han and Ladybug go to find Cat Noir, when they arrive Cat Noir says this must be the guest she talked about in her message. Su-Han is really annoyed that Cat Noir is also a child, Ladybug tries to explain who he is, but she is interrupted by Su-Han who explains it in a hurry. He then demands their Miraculouses. Su-Han says when the lion speaks the cub listens, then tells Ladybug to give him the Miracle box and her Miraculous, Cat Noir says the demand to be a bad joke while Ladybug asks how they're going to defeat Shadow Moth without them. but she notes that her memory would be erased just like Fu if she gives up the Box. A sad Cat Noir, then threatens Su-Han, who fights him and Ladybug.

Ladybug and Cat Noir then escape with the Miracle Box and Su-Han’s staff with Su-Han tracking down Fu. He then finds Fu and Marianne and tries to take his cane, and then sees an akuma sent from Shadow Moth, but Su-Han stops the akuma, and takes Fu's cane. However, Fu, upset about Su-Han pushing down Marianne and taking his cane, tries to get his cane back, but ends getting akumatized right in front of Su-Han, who runs off to track down Ladybug & Cat Noir again. Ladybug, Cat Noir, and Su-Han then meet again at the stadium where they're introduced to Fu who is now Furious Fu. Furious Fu then centers a thunderstorm around the stadium fighting Ladybug, Cat Noir and Su-Han. They then race to the Miracle Box where Cat Noir accidentally kicks the Box like they are playing soccer and then focuses again.

Furious Fu then uses a teleportation card causing him to get hold of the Miracle Box. Though saying that Guardians were trained to fight rebel Miraculous holders, not villains created by their powers, Su-Han eventually fights Furious Fu but ends up freezing like a statue. In a new suit, Ladybug then summons up her Lucky Charm getting bolt cutters, using it to open a bin to get a soccer ball with Cat Noir holding Furious Fu off. The ball blocked Furious Fu's attempts to Cataclysm Cat Noir, putting him in a stalemate position. This distracted him long enough for Marianne to arrive and break his paintbrush in half, which contained the akuma and de-akumatized Fu. Ladybug then gives him a Magical Charm, saying it will now prevent Shadow Moth from akumatizing him. Su-Han then apologizes to Fu and Fu accepts it.

Back at the train, Marinette sends Fu and Marianne off, but not before Fu talks of Ladybug's awesomeness and likens Marinette to her. In response, Marinette brings up Marianne's prior heroics.

In Marinette's room, Su-Han is upset about Marinette involving Marianne, a civilian, into the fight, but compliments her about her natural instincts. He says that the Chinese Miracle Box is the most powerful one, holding the most powerful Miraculouses ever, but gives an apology for not trusting her. He leaves the box in her care, but warns that he will be watching over her, and will take the box if she fails once. He then leaves, says he will learn about the modern life, to learn what threats there are. Before leaving, Marinette then gives Su-Han a new pair of shoes, pointing down to his broken sandals and his feet with them laughing, ending the episode.