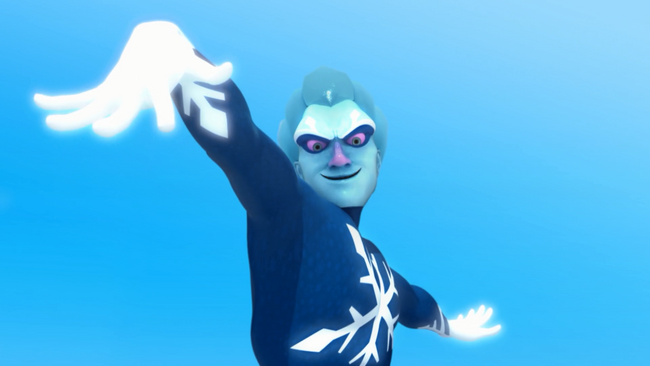 A figure skater gets akumatized by Hawk Moth into Frozer, a villain armed with powerful skates who tries to turn Paris into a frozen wasteland.[7]

Cat Noir and Ladybug once again save the city of Paris. Cat Noir offers a rose to Ladybug when they have finished. She denies him again for she loves someone else. He is sad and somewhat angry and proceeds to his normal everyday activities (such as fencing). He is dueling Kagami and is easily defeated for he is feeling so down. Adrien is feeling depressed in the locker room and picks up the rose he was going to give to Ladybug. Kagami comes in and tells him he should "choose a different target" so he hands her the rose. Despite this Adrien still admits he loves Ladybug even though Plagg insists on pursuing Kagami. Adrien tries to talk to Nathalie and the Gorilla about his personal issues but no one pays attention. He then goes back to school and see's that everyone has a partner, either friends or lovers. Marinette runs into him and he asks for love advice. Marinette thinks its about her but Adrien says its about Kagami and she gets upset. She accidentally insults Kagami by calling her Ice Queen but quickly changes it to Ice Rink. Adrien says he is afraid to go to the ice rink and Marinette agrees to go with him and Kagami.

Marinette and her friends meet up on Juleka's houseboat and they discuss how bad this is for her and try to come up with a plan. She dismisses it and says she will go for Adrien because he is a friend and needs help, and that she isn't jealous. Rose asks if it is because they love each other. On the contrary, Marinette sadly claims there is nothing between them. After hearing this, the girls (except Marinette) start arguing about her feelings for Adrien and how she just ultimately "dropped" him. Marinette, feeling left out, walks out of the room and sees Luka playing his guitar. His music relates her feelings and he tries to cheer her up with another song, and she laughs. She then asks him if he's free tomorrow.

At Adrien's house, Adrien lies to his dad and says he is going to go practice one on one with Kagami, but has Gorilla drop him off at the ice rink. At the ice rink, a horrified Phillippe questions the Mayor's decision to close the ice rink down to turn it into a gym for Chloe. Phillippe notices the four walk in and says that he will get a signature in 10 minutes to keep the building. Adrien comments on Luka but switches to his issues quick. Marinette gives advice to Adrien but suddenly falls into Luka's arms. Luka seems chill and tells Marinette to "Relax and follow my lead." completely ignoring Adrien. Adrien seems kind of sad and walks over to Kagami, who shortly teases him because he doesn't know how to tie his ice laces. Kagami ties his laces and they proceed to ice skate. Adrien and Kagami skate perfectly but Marinette is having issues, and keeps getting distracted from time to time.

Phillipe then goes to each person asking for a signature and each person denies. Adrien is nervous and Kagami is showing off her skills and confidence at this point. Luka does some really nice skating with Marinette. Kagami and Adrien get closer; Marinette sees this, gets distracted and she falls away from Luka and slams into a wall. When she is down Luka and Adrien both come to her rescue but she struggles on whose hand to grab. Kagami comes in and pulls her up and whispers that the only reason she can't stay on her feet is her hesitation, and she adds that she never hesitates. After she pulls Adrien away. Marinette becomes despondent again and tells Luka she hurt herself and needs to go sit down. After seeing her skate off looking sad, Adrien tells Kagami he needs to check on Marinette because she seemed sad, as a crestfallen Phillippe sits down and hears the Mayor's final decision to close the rink. Hawk Moth detects Phillippe's emotions and sends an akuma after him.

Marinette locks herself in the bathroom and Tikki flies out of her purse. She tells Tikki that she likes Luka and that he's nice, but wonders if he's just like Adrien, a friend. Adrien suddenly knocks on the bathroom door, surprising her and Tikki, and he asks if she's okay, to which she agrees. Plagg then reminds him that he's in love with Ladybug, and now he's ditching Kagami to go after Marinette. Adrien rather clarifies that she is only just a friend.

At this point Hawk Moth's akuma reaches and akumatizes Phillippe into Frozer and he starts freezing the whole of Paris. Adrien and Marinette, noticing the ice rink was turning into ice, each quickly powered up their kwamis with the ice power up and transformed. When they meet up, Cat Noir acts angry and cold as he says for Ladybug rejected the rose. He runs off on his own to find Frozer, leaving a protesting Ladybug to search on her own. Ladybug thinks of a trap but ponders on what to use as bait. Frozer, watching from the Eiffel Tower, sees her and prepares to attack her. However, Cat Noir, who saw everything, leaps in at the last second and pushes Ladybug out of the way, and they escape. Ladybug thanks him, and he winks. Frozer starts chasing them and throwing ice shards with his skates, which they dodge. Ladybug remarks on how he's too fast. Just then, they pass under a bridge but Frozer jumps across it, and is now showering them with more ice shards which they continue to dodge. Ladybug then comments that she is sure that the akuma is in his skates. They continue to dodge more shards and eventually Frozer loses sight of them and searches for them. Meanwhile, while the two are hiding behind a truck, Cat Noir says that he can use his Cataclysm to destroy the skates, but Frozer has to be high up in the air to do so. He then tells Ladybug that she was right about setting a trap, and she also told Cat Noir that he was right to observe, as they now know more about their surroundings. Ladybug then uses her Lucky Charm and gets a bag of salt, to her confusion, until she notices a tiny amount of salt pouring out of the bag, and where the salt was, the ice disappeared. Ladybug then realizes that salt makes the ice melt and instructs Cat Noir to melt objects and she'll distract Frozer so he can use his Cataclysm on Frozer's skates. The plan works and Frozer is deakumatized into Philippe.

When they get back Kagami seems a little upset about him still doing what other people tell him to do. Adrien tells her he just wants Philippe to be happy, and that he won't be changing his target, knowing one day he will succeed. He looks at Marinette as he says this. Kagami them tells him that if the day comes and he realizes he has the wrong target, she'll be there for him and kisses him on the cheek before entering the car and driving away. Marinette, after seeing this, becomes despondent again. Her expression is sighted by Luka, who, after asking her if she wants to take the subway and she doesn't respond, tells her she should talk to Adrien as his car drives away. She thanks him for coming with her, gives him a quick kiss on the cheek and runs away to Adrien shouting his name. He gets out of the car and she confesses to Adrien about her love for him. Then, Adrien admits that he loved her this whole time and holds her hands. She is shocked by this, but very happy. She then awkwardly talks about them getting married and having a hamster. Adrien says her name, which makes her realize it was just a daydream starting from her running towards his car. Marinette feels awkward and hesitantly asks if he liked to go the rink with her again sometime but with the whole gang present. Adrien agrees and his bodyguard drives away. Marinette was disappointed with what she said and that she failed again. Tikki tells her not to worry and says she'll get it right one day and she walks away whilst random people were volunteering to Philippe to take his ice skating lessons thanks to Adrien's post ending the episode.