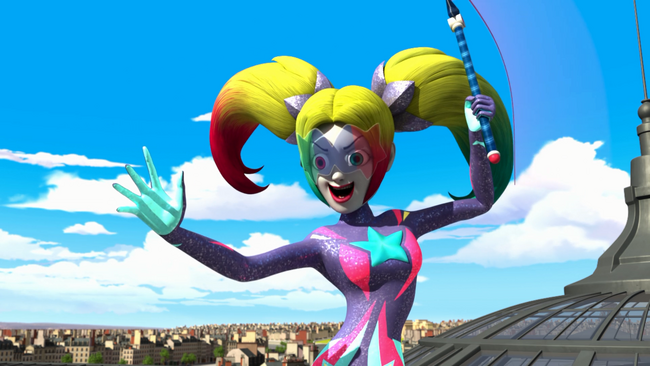 Marinette is cast to play Ladybug and Adrien as Cat Noir for a music video honoring the heroes, but the star gets akumatized into a musical monster.[7]

A young singer gets akumatized into Frightningale. Armed with a magic microphone, she wants to transform Paris into a giant musical.[8]

The episode starts with Clara Nightingale on Marinette's computer, singing her latest single, called "Big Bang". Marinette tries to do the dance moves that are in the choreography of her music video but fails. After the music video ends, Marinette talks about how much she loves Clara's music and dancing. When Clara is talking with Alec in an interview about her new music video, she announces that the theme is "Miraculous", which centers around Ladybug and Cat Noir. She claims to have already found her Cat Noir but is looking for a Ladybug and some extras.

Marinette then receives a phone call from Alya, Rose, Juleka, Mylène, and Alix, asking if Marinette has heard about the casting. Marinette says she has and agrees to meet the girls at auditions. When Marinette hangs up, Tikki follows her holder and speaks to her. As she is diligent for Marinette's identity to stay safe, she is concerned with the idea of her auditioning for the part of Ladybug. Marinette consoles Tikki and reassures her that she will always be cautious about protecting her secret identity and will instead audition as an extra for the music video. As they both leave, a relieved Tikki praises Marinette for making the right decision and kisses her on the nose.

At the Agreste mansion, Gabriel tells his son that he is going to play Cat Noir in Clara’s music video since the singer has been a supporter of his brand since starting her career. Adrien is discouraged by the task, believing that people will find out about his secret identity if he goes as the superhero. Plagg reassures him that people are too blind to notice, but Adrien is not convinced. Regardless, he decides to just avoid putting the mask on and goes to the stage. Gabriel asks Adrien where his mask is and Adrien lies, stating that he couldn’t find it. A nearby stagehand overhears and goes to look for it. Clara tells Adrien that it’s okay and begins auditions.

There are several girls (and boys) eager to play Ladybug, but none of them are right. When no one else is left, Clara comes up with a plan to find the right Ladybug. She offers the extras a snack and then trips on purpose. Marinette runs to help her, and Clara declares that she has found her Ladybug, claiming that Marinette did exactly what Ladybug would've and that she’d be perfect. Marinette wants to play Ladybug and be in the video with Adrien, but knowing that she must keep her identity safe, she politely turns down the offer, stating that she’d rather be an extra with her friends. Clara understands and leads Marinette to a chair to wait for makeup. When she leaves, Tikki congratulates Marinette for being sensible and not giving into the temptation.

A limousine drives up to the building the auditions are being held at. Chloé, dressed as Ladybug, walks inside and thanks everyone for coming, adding that they can leave now. Alya lets Marinette know, but the latter says that she does not have a chance at playing Ladybug. Chloé auditions for the role and nails it. Clara commends Chloé on her talent and asks Gabriel what he thinks. He thinks that Marinette would’ve been better but decides that they have no choice but to use her for the video since she refused. Marinette, however, doesn’t want Chloé to play Ladybug and has a change of heart, deciding to be Ladybug after all despite Tikki’s protests. Clara allows this but tells Chloé that she can still be an extra. Chloé, however, is disgusted by the thought of being a mere extra and angrily exits the building.

Marinette puts on the Ladybug costume and fears being recognized as the real Ladybug. She decides to leave the mask behind and goes to the stage where she and Adrien begin rehearsal. Meanwhile, at the limo, Chloé is upset about not getting the part of Ladybug and be close to Adrien. Despite her butler's attempt to cheer her up with her teddy bear, Chloé blackmails her father into having Clara’s music video cancelled by threatening to call her mother.

Before having the chance to do so, Chloé and André storm inside and stop the rehearsal, with the mayor showing Clara a bunch of papers that supposedly show that she doesn't have permission to make a music video in Paris or anywhere else in France. Chloé taunts Clara and throws her microphone on the floor, breaking the star decor on it. Humiliated and disheartened, Clara runs to her trailer crying, making her the perfect target for Hawk Moth. The akuma possesses her microphone and transforms her into Frightningale, a supervillainess capable of turning people into pink metallic statues if they don't sing, dance, or rhyme.

As Chloé dismisses all the extras, Frightningale makes her entrance and whips both her and the mayor. When Chloé confronts her, she fails to sing, dance, or rhyme, immediately turning her into a metallic statue. Her father frantically begs Frightningale to return his daughter to normal with a rhyme after she explains how he can avoid Chloé’s current condition, but fails to reason with her. Frightningale then leaves and starts to whip people all across Paris, turning them into metallic statues.

Marinette and Adrien transform into Ladybug and Cat Noir to face the new threat. Ladybug manages to stop Frightningale on the theatre's roof and tries to convince her to give her the akuma, but to no avail. The villainess starts using Ladybug's own yo-yo against her until Cat Noir appears and trips her with his staff. Despite initially getting the upper hand, Frightningale manages to dodge their attacks, making them accidentally attack each other instead. With Hawk Moth's advice, Frightningale manages to whip both Ladybug and Cat Noir, and they realize they must sing, dance, or rhyme in order to keep fighting or else they will be turned into statues.

After a close call, Ladybug and Cat Noir start to talk with each other in rhyme while dancing, avoiding Frightningale's attacks while trying to come up with a plan. Frightningale tries to distract them and make them fail the rhyme, but they manage to get away from her to make a better plan. After dancing and rhyming for a while, Ladybug uses her Lucky Charm, which provides her with some handcuffs. After pondering how they can be useful, she handcuffs herself to Cat Noir and they start attacking Frightningale in sync. Cat Noir uses his Cataclysm and holds it in until they get close enough. He takes Frightningale's microphone and destroys it, releasing the akuma so Ladybug can return everything back to normal.

Clara comes back and is excited to know she was saved by Ladybug and Cat Noir themselves. Ladybug then gives her an idea on how she can finish her music video, which Clara likes.

The video has a song identical to the series' theme song and shows many people dancing with Ladybug and Cat Noir masks, including all of Marinette and Adrien's classmates (except Chloé), the teachers, and some of their other friends like Ondine, Luka, and Marc. While watching the video, Alya and the others remark how outrageous it will be for Marinette and Adrien to be Ladybug and Cat Noir despite physically resembling them. They both nervously agree with the remark, with Marinette stating that Adrien doesn’t look like Cat Noir and Adrien stating that Marinette doesn’t look like Ladybug.