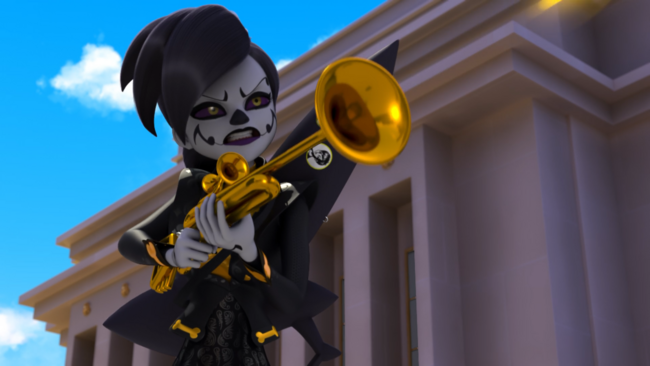 Jagged Stone seeks to replace the guitarist he fired, who akumatizes into Desperada, a villain with a magic guitar that turns people into stickers.[7]

Jagged Stone's guitarist Vivica gets Akumatize into Desperada; Armed with her evil guitar, she wants to punish Jagged Stone for firing her; Ladybug and Cat Noir better be ready to rock on.

Luka is giving Marinette a guitar lesson, and her friends comment on how easy it is for Marinette to talk to Luka. Adrien and Kagami arrive at the Liberty to join their friends. Alix, Alya and Mylene comment on how cute Luka and Marinette would be together. When Adrien and Kagami arrive, everyone is shocked that Gabriel seemed to have let Adrien go out. They explain how they were supposed to be at fencing practice, but they "accidentally" ended up at the wrong address. Marinette is saddened by how well Adrien and Kagami get along. Kagami mistakes Luka for Marinette's boyfriend. Marinette tells Alya that Luka is just a friend, much to Alya's disbelief.

Jagged Stone arrives, requesting that Anarka become his new guitarist. Anarka immediately refuses, saying that she would not be a second choice. She thinks Jagged Stone is only asking her to become his guitarist because he fired his original one again, but Jagged denies this, saying she quit on her own. Anarka still refuses, and Jagged is disappointed until he notices Marinette. He asks her if she knows anyone who can be his guitarist. Alya points at Luka, signalling to Marinette that she should recommend Luka. Marinette misinterprets this message and recommends Adrien instead, to everyone's shock. Adrien tells Marinette that he actually doesn't know much about the guitar. Jagged Stone is reluctant and asks about Luka. Marinette likes Jagged's idea and says Adrien can borrow Luka's guitar.

Before Adrien can play any notes, Jagged Stone's former guitarist, Vivica, who had been akumatized into Desperada, makes an appearance to take revenge against Jagged for firing her. This confirms Anarka's suspicions, who earlier had denied Jagged's claim that Vivica quit by her own decision. Desperada uses musical instruments, which are pulled out of her guitar case, to fire yellow smoke at everyone, which turns them into stickers on her guitar case. Marinette quickly runs into the ship's cabin to transform into Ladybug.

While Luka tries to help him and Adrien find a safe hiding place, Ladybug uses her yo-yo to knock Desperada's trumpet away. While Ladybug continues to battle the villian, Luka wonders where Cat Noir could be. Adrien says he might not be there on time, so Luka decides to help Ladybug in the meantime. Luka plays his guitar, which distracts Desperada, giving time for Ladybug to capture her. She wire-cuts the bridge the villain was standing on and helps Luka and Adrien escape into the sewers.

Ladybug thanks Luka for his help. She tries to contact Cat Noir but gets no answer. Adrien escapes into the sewers. Ladybug summons her Lucky Charm, creating a gong. Ladybug leaves Adrien and Luka to hide while she goes to see Master Fu but borrows Luka's guitar. Luka hides in a locker. Adrien pretends to hide, then escapes to transform.

Meanwhile, Desperada is running through the streets searching for Ladybug and hears horrible guitar music. The music's source turns out to be from Luka's guitar with bread attached to have pigeons peck on the strings. This distraction gives Ladybug time to see Master Fu. Master Fu tells Marinette to choose a Miraculous. Knowing that Desperada is relentless and that there would be no second chances, Marinette decides to borrow the Snake Miraculous.

Cat Noir tries to escape through the sewers until he bumps into Ladybug. She searches for the Snake Miraculous and tells him she wants to give it to Adrien Agreste, saying he's the perfect one for the job. Cat Noir claims that his incredible sense of smell will help them locate Adrien and leads Ladybug to the lockers but says his nose failed him. Luka comes out of his locker and asks if Desperada has been defeated. He then notices Adrien's absence. Cat Noir tells Ladybug to split up and find Adrien and tells Luka to hide back in the locker.

Cat Noir runs off and detransforms. Adrien is ecstatic that Ladybug chose him to wield the Snake Miraculous. Plagg disapproves of such an idea, because he can't possibly be the perfect one for the mission if he is also Cat Noir. Adrien retorts by saying the Lucky Charm told her he was, but Plagg says that isn't how the superpower works. Plagg also comments on how trying to reason with Adrien is pointless, because he isn't listening. Adrien sees this as an opportunity to get Ladybug to fall in love with his civilian self, and he has to try.

Ladybug then finds Adrien and offers him the Snake Miraculous. Much to Plagg's dismay, Adrien accepts the Miraculous and transforms. Before leaving the sewers, Ladybug explains how the snake's power functions. Upon activation, the user has five mintues to go back in time as many times as he wants by pulling back the head on the bracelet. Ladybug summons her Lucky Charm and receives a horse saddle. The two exit the sewers, and Ladybug is captured by Desperada, who is hiding in the Eiffel Tower. Adrien uses his Second Chance. Adrien names himself Aspik. He makes several attempts to succeed but is constantly distracted while trying to charm Ladybug. In one version, he even confesses his love for Ladybug along with his identity as Cat Noir. However, this knowledge is erased from Ladybug's mind after she is captured, and Aspik uses his second chance. He attempts to change the future 25,913 times over the course of months but fails every time. Knowing he wasn't the right person to wield the Snake Miraculous, he immediately detransforms and returns the bracelet to Ladybug. Surprised by his actions Ladybug convinces Adrien to try again but upon him refusing the heroine believes she did something wrong until Adrien explained that he messed up telling her what's been happening during his time as Aspik, after Luka returns Adrien recommends that Ladybug give the Miraculous to him. Ladybug gives Adrien a thank you kiss on the cheek for saving her life so many times. Ladybug give the Miraculous to Luka, who uses it to transform into Viperion.

Adrien finds Plagg and is disappointed that he could've made a bad impression on Ladybug. Plagg tells him to make up for it as Cat Noir, and he transforms.

Ladybug finds Desperada hiding on the Eiffel Tower, and Cat Noir uses his Cataclysm on the ground below. After using his Second Chance a few times. Viperion figures out how to defeat Desperada. The three use Ladybug's yo-yo, Viperion's lyre, and the saddle to tie up the villain's arms and legs. Ladybug breaks Desperada's guitar case and cleanses the akuma. Ladybug uses Miraculous Ladybug, and Desperada is deakumatized into Vivica. Luka returns the Miraculous to Ladybug.

Back on Anarka's boat, Jagged apologizes to Vivica for firing her, and she is rehired. Kagami tells Marinette that she was wrong about her and Luka but tells her to choose between Adrien and Luka, because life doesn't always give you a second chance at love. Alya tells her Luka and Adrien also have a right to choose, and the end card appears.