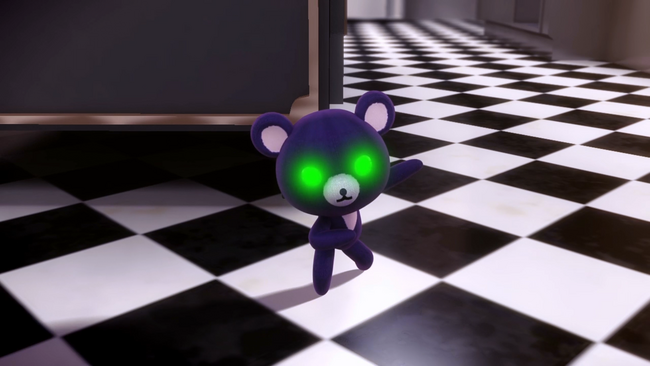 Trying to learn how to be nice, Chloé throws a party but loses her temper and fires her butler, who becomes akumatized into the vengeful Despair Bear.[8]

Humiliated by Chloé, her own butler gets akumatized by Hawk Moth. Now Despair Bear, he can manipulate anyone he touches and is determined to get revenge on Chloé. Ladybug and Cat Noir must not lose control![9]

Marinette's father, Tom Dupain, is teaching the class how to bake macarons. Alya tells Marinette that she loves it when her dad gives the class lessons. Marinette says her dad does, too. Chloé, however, begins complaining about having to get herself dirty. In order to avoid baking, Chloé secretly calls the fire department. Tom asks Marinette to place the bowl he’d been baking within the school fridge. When she leaves to do so, Tikki flies out and asks for a taste, but Marinette tells her not yet and to control her sweet tooth. Suddenly, the fire alarm goes off and the whole class has to evacuate the school.

Soon afterward, Mr. Damocles is furious with his students because someone called the fire department for no apparent reason and was wasting the department's valuable time. He demands that the guilty party should apologize. Marinette is convinced that it was Chloé since she saw her make a phone call before the alarm went off, but Alya tells her that seeing Chloé make a phone call isn’t solid enough proof. Chloé attempts to blame Marinette for the incident, but fortunately, Adrien and Alya defend her. Mr. Damocles states that since no one is willing to confess, the whole school is going to be punished. However, when Chloé threatens to call her father, Mr. Damocles agrees not to punish her.

The whole school is forced to mop up floors while Chloé sits on a bench using her phone. Adrien witnesses Chloé being rude to Rose and making her cry. He angrily walks up to her and asks if she was the one who called the fire department, which Chloé admits to. She says that since everyone seems to enjoy getting dirty baking, it’s no different from having to mop floors. Adrien sighs and asks Chloé how long they’ve been friends. Chloé says since they were tots. Adrien tells Chloé that unless she starts being nice to people, he’s not going to be her friend anymore. Later on at the Le Grand Paris hotel, Chloé is sadly sitting in her room when Butler Jean comes in and offers her some chocolate, which she promptly gobbles up. She then starts crying and tells Jean what Adrien said. In order to cheer her up, Jean gives Chloé her favorite stuffed bear from when she was a child, Mr. Cuddly. Chloé grabs him and starts hugging him affectionately. Jean offers to help Chloé and when asked why says it’s because that’s what it means to be nice. He also tells her that the bear, Mr. Cuddly, can help her to be kind towards others. Chloé agrees and is sure that she’ll win back Adrien’s friendship.

At Marinette's house, Rose, Juleka, and Mylène are all trying out hats designed by Marinette while Alya records them. Just then, Alya receives an invite from Chloé to a party, as well as Rose, Juleka, and Mylène. Rose calls Chloé nice for doing that, but Marinette finds it hard to believe that Chloé could ever be nice. Mylène suggests that maybe someone hacked her phone, but when Marinette says that she didn’t receive an invite, Alya concludes that it must be Chloé. However, quickly afterward, Marinette does receive an invite, much to her disgust. At first, she refuses to go, but after finding out from Alya that Adrien will be there, she agrees to come along.

Hawk Moth learns of Chloé’s party and is so confident that someone will obtain negative emotions there that he sends out an akuma ahead of time. At the party, Chloé watches over the guests on top of the hotel steps. Jean suggests that she greet them with a hug and kiss. Chloé is against letting anyone touch her cheeks, but Jean tells her that’s what Mr. Cuddly would do. When Chloé sees Adrien walk in with Marinette, Alya, and Nino, she rushes downstairs and hugs and kisses him. Rose, Kim, and Max do the same thing to Chloé. Chloé becomes hesitant to kiss Marinette’s cheeks, with Marinette equally being against the idea. But after spotting Mr. Cuddly from the distance, Chloe reluctantly gives in. At the same time, Marinette is watched by Adrien who looks happy, she gives in as well. Once they’ve kissed each others cheeks, both girls immediately spit in disgust in front of the crowd. Alya laughs and declares that she should’ve recorded them. Marinette tells her not to rub it in.

The party soon goes into full effect with Nino being the DJ and several kids either playing in the ball pit or video games on the big screen. Jean suggests that Chloé check to make sure the guests are having a good time. Chloé asks why she should do that, and Jean tells her it’s what Mr. Cuddly would do while waving the bear in front of her. Embarrassed, Chloé pushes Jean’s arms down and agrees to do so. She walks over to Nathaniel and with forced kindness asks him if he’s having fun. Mylène dances her way towards Chloé and asks for some ice in her drink. Chloé says she doesn’t know where the ice cubes are and then begins to insult Mylène’s sweater, much to Mylène’s surprise. Hawk Moth is pleased with Chloé and prepares to infect Mylène with the akuma, but before he can, Jean reminds Chloé of Mr. Cuddly. She quickly takes back her insult and offers to get Mylène the ice cubes, which makes her negative emotions go away, much to Hawk Moth’s frustration. After giving Mylène multiple cubes of ice and spilling them on the floor, much to her surprise, Nino then plays slow dance and the others started to dance. Kim asks Chloé for a dance. At first, she refuses, disappointing Kim, which almost gets him akumatized, but Chloé is reminded once again of Mr. Cuddly and therefore accepts his offer, infuriating Hawk Moth even more.

While dancing with Kim, Chloé is outraged when she sees Marinette and Adrien dancing. She starts heading towards her but finds her path blocked by Jean and Mr. Cuddly. Kim asks Chloé if that is her bear and everyone begins laughing at her in amusement. Chloé loses her cool and drags Jean into the kitchen, where she angrily fires him. As a result, he is akumatized into Despair Bear.

Despair Bear rushes to Sabrina and attaches itself to her leg. Sabrina, under the influence of the bear, begins chasing Chloé with a hairbrush. Chloé hides behind Kim, and Despair Bear attaches itself to Kim, making him ask Chloé if she would want to dance. Seeing Despair Bear clinging to Kim's leg, Marinette and Adrien make quick excuses to each other so they can leave and transform.

Despair Bear moves from Kim, to Max, to Alya, to Ivan, and finally to Cat Noir. Battle ensues between Ladybug and Cat Noir. A controlled Cat Noir attempts to use Cataclysm on Ladybug, but is stopped by Chloé when she pulls his tail.

Ladybug uses Lucky Charm and receives a fork. Chloé follows the two superheroes as they run upstairs. Ladybug manages to sever a string on Despair Bear, as he is still made of cloth, and attaches the string to an umbrella. While she distracts Cat Noir, Chloé unravels the rest of Despair Bear by spinning the umbrella. Once Cat Noir is back to normal, Ladybug breaks the string and releases the akuma. Chloé gloats in how she helped the two heroes and grants Jean his job back.

At the end of the episode, Chloé invites Marinette’s dad to the party so he can finish the cooking lesson he began at the beginning. Adrien and Chloé pinky-promise that they will always be best friends. Chloé appears to go back to being rotten, insulting everyone’s macarons. Adrien asks Marinette for one of hers. She drops the pan, but luckily, he does manage to catch one. He tells her that her baking is as good as her dancing.