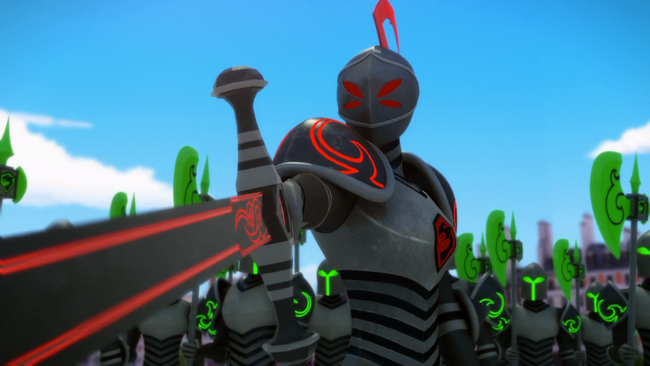 While Marinette tries to retrieve her diary from Chloé, Adrien's fencing teacher is akumatized into Darkblade, a villain who storms city hall.[8]

Marinette jumps down into her room from the balcony, immediately detransforming from Ladybug. Nadja Chamack is on Marinette's computer, the news report about how Ladybug and Cat Noir saved the day. Marinette pulls out a pink box, prompting Tikki to ask about it. Marinette explains that it will be holding her diary, which contains all of her secrets as Ladybug. Marinette sets the diary in the box with the lid open, telling Tikki to try and take it out. Tikki flies down and picks up the edge. Before she can fly out, the lid slams shut, locking her inside. Marinette lets her out with a key.

Nadja Chamack switches to another news report, stating that the previous day, André Bourgeois was reelected for the fourth time as the Mayor of Paris. Seeing Chloé's attitude in the news footage, Marinette comments that Chloé is acting like she is the one to have been reelected. This comment prompts Marinette to remember that the next day is the election for class representatives at Collège Françoise Dupont and that Chloé is in the running. Tikki suggests that Marinette run too, but Marinette feels as if she has too much to do between homework and saving Paris. The news report returns, bringing with it the face of Armand D'argencourt, the losing candidate, who is also a fencing instructor at the Collège. Marinette rests her hand on her chin, watching the report until she sees the time in the corner of 8:44 am, knowing she'll be late to school if she stays any longer.

In Miss Bustier's classroom, Chloé and Sabrina are standing in the front of the students. Chloé is running with Sabrina as her deputy. Just then, Marinette runs in, her excuse being that she missed the bus and she has a cold. Alya brings Marinette up to speed, mentioning that Chloé has been the class representative since elementary school. Miss Bustier dismisses them for lunch, letting the class mull over its decision. In the school's courtyard, Chloé uses threats to dissuade Kim from entering the race for class representative and wanders off with Sabrina to threaten the rest of the class. When Marinette asks Alix what Chloé told her, Alix mentions that she doesn't care and wonders why Marinette won't run. Marinette claims again that she's far too busy to run, but then cedes that she will run if no one else will. Returning to the classroom, Miss Bustier asks if anyone else wants to run against Chloé and Sabrina. Finding no opposition, Miss Bustier almost declares Chloé and Sabrina the class representatives, but Marinette interjects, stating that she'll enter the race. Excited, Miss Bustier tells Marinette that the next day the candidates will give speeches and the students will have a chance to vote.

During a break, Alya tries to help Marinette come up with a campaign platform. Marinette realizes that she had not put much thought into how to run a campaign, but is approached by Rose, Juleka, and Nino, who supply her with plenty of ideas. Alya spots Adrien descending the stairs and asks him if he will vote for Marinette. Adrien responds that he will if she gives a good speech, thereby motivating Marinette further. Only meters away, Chloé and Sabrina watch the scene, and Chloé explains to Sabrina that according to her father, the best way to win a political race is to destroy the opposition's reputation and reveal its secrets.

Back in her room, Marinette lists what her classmates want in her diary, trying to come up with her speech. Marinette's cellphone buzzes, and when Marinette picks up she sees Alya, who appears angry. Alya explains that Chloé invited the entire class to the Hôtel de Ville to meet Jagged Stone. Marinette is excited since Jagged Stone is her favorite singer but quickly realizes that Chloé is buying her classmates' votes with autographs. Marinette leaves her room, leaving the diary box open on her desk.

As Marinette runs out of the bakery, Sabrina steps around the corner, on her phone with Chloé. Sabrina walks in past the customers Sabine is waiting on, claiming she needs to pick up a math book that Marinette borrowed from her. Sabine explains that Marinette just left, and sends Sabrina up to Marinette's room.

During his fencing class, Adrien is taken out by a remarkable attack from his coach, Mr. D’Argencourt, who reveals that the move was developed by his ancestor, Darkblade. D'Argencourt then explains how his ancestor once conquered Paris and ruled over it with an iron fist, but was overthrown by a wealthy Frenchman. Nadja Chamack appears behind him and asks him whether the story of his ancestor was what motivated him to run in the election. Infuriated, Mr. D’Argencourt ends Adrien’s lesson and storms off. Hawk Moth senses Mr. D’Argencourt’s frustration and sends an akuma after him.

As Mr. D'Argencourt leaves the school, Nadja and her cameraman follow him while getting footage for the news. When Mr. D’Argencourt bumps into a poster featuring Mayor Bourgeois, he angrily slashes it to pieces, surprising the news crew behind him. The akuma then arrives and possesses his fencing sword. Hawk Moth offers D'Argencourt the chance to be the city’s new ruler and akumatizes him into the supervillain Darkblade, who transforms Nadja and her cameraman into knights. He proclaims that he will form an army, take over City Hall, and reclaim his family’s throne. Seeing Darkblade continue to turn citizens into knights, Adrien transforms into Cat Noir. Darkblade and Cat Noir face off and begin to fight.

Meanwhile, Sabrina arrives inside Marinette’s room and talks to Chloé on the phone, trying to find something to steal that they could use against Marinette. Sabrina spots Marinette's diary and tries to grab it, only to have the diary box close down on her hand. Meanwhile, Marinette arrives at City Hall and sees Jagged Stone and the launch party for Chloé’s campaign. Alya meets Marinette, revealing that she got Jagged Stone's autograph. This offends Marinette, but she eventually decides that this is all right as long as Alya still votes for her.

Cat Noir continues fighting with Darkblade at the Pont des Arts but loses when his staff is thrown off the bridge. He hides under the bridge and manages to overhear Darkblade's plan to go after Mayor Bourgeois at City Hall.

Back at City Hall, Marinette explains to her classmates that Chloé is bribing them for their votes. Chloé arrives, pulls Marinette away from the crowd, and reveals to her that she and Sabrina have her diary, blackmailing her to end her campaign. This conversation is interrupted by Darkblade and his army, who storm the building but are blocked by Cat Noir. Jagged Stone mistakes the battle outside for excited fans, goes out to perform for them, and is confronted by Darkblade. Jagged Stone tries to persuade Darkblade that "violence is never the answer," and is promptly transformed into a knight.

Panicking about Darkblade, several students ask Chloé for help. Chloé replies that she can’t help her classmates unless they vote for her and that she’ll announce a solution the following day. Marinette realizes that Cat Noir needs her help to defeat the knights, but also realizes that her classmates are depending on her to protect them. Tikki suggests that she trust her instincts, and so Marinette begins guiding her classmates in barricading the doors and defending City Hall, and tells the mayor they have to retreat. Once everyone is out of the way, she turns into Ladybug and rushes to help Cat Noir.

Outside, Cat Noir is surrounded by knights, but Ladybug rescues him with her yo-yo. As they work together to fight off the knights, Darkblade turns two cars into catapults and launches himself onto the roof. Cat Noir and Ladybug follow him and see that he is about to place his family flag on top of City Hall. Ladybug realizes that akuma must be in Darkblade’s sword, and tries to get the sword before he plants the flag, but she is too late. As Darkblade plants the flag, a dark cloud spreads over Paris and creates a gigantic cylinder of darkness that shrinks inwards, turning everyone it passes through into knights.

Ladybug and Cat Noir realize that they have little time to spare before they too are transformed into knights. Ladybug uses Lucky Charm, which produces a small wind-up toy. Using her lucky vision, Ladybug tosses the toy under Darkblade’s shoulder, tickling him and causing him to drop his sword. Ladybug rushes in and snatches the sword, revealing the akuma and causing the cylinder of darkness to vanish. She catches the akuma and purifies it, tosses the toy into the sky, and cleanses the city, returning everyone back to normal.

Ladybug finds her way back inside and detransforms. Tikki expresses her pride in Marinette for being both Ladybug and a student leader at the same time. While the students removed the posters and chairs from the door, Marinette makes it public that Chloé had stolen her diary. The students start to surround and question Chloé, who tries to deny all allegations against her, but her efforts are in vain as Sabrina shows the box locked around her hand and pleads that Marinette opens it, which she obliges to. Chloé's inexcusable actions lead most of the students to believe that she's already lost the race to be the class representative.

However, Marinette explains to her classmates that she wants to be voted in fairly, and not just because she's an alternative to Chloé. She explains that she will not make any promises that she would be unable to keep, but asserts that she is resourceful and knows how to prioritize–and most importantly, that she believes in herself, earning praise from the class, including Sabrina, causing Chloé to walk away furiously. The following morning, Marinette is elected as the new representative, with Alya as her deputy.