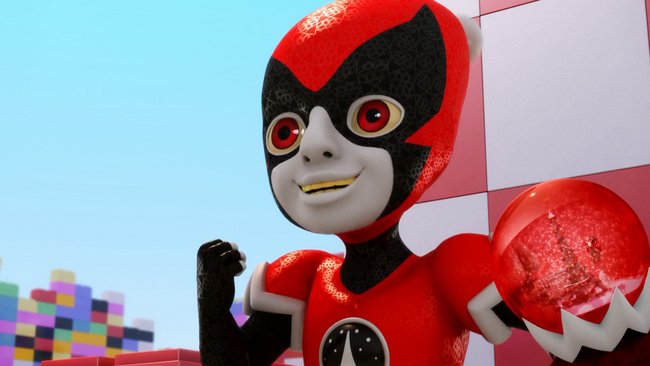 Marinette is taking care of Chris Lahiffe, the brother of her friend, Nino, but he is bored by Marinette's games, considering them to be for babies. He gets curious about the chest in Marinette's room. In order to keep the secret that she keeps presents for Adrien's future birthdays, Marinette says that she's one of Santa's secret elves who keeps presents for Christmas, and only the best-behaved kid in the world can receive a gift before Christmas, leading Chris to want Christmas to come immediately. Nino and Alya come in and pick up Chris.

Marinette starts to make another present for Adrien but falls asleep. When she wakes up, she realizes that it is snowing and that the streets of Paris have been invaded by living toys in search of Santa Claus. Marinette transforms into Ladybug and, finding Santa's broken sled, calls Cat Noir who reveals that he is at the ice rink with Philippe and Santa Claus. After reaching them, Santa explains that he was inexplicably catapulted to Paris, and Cat Noir saved him from the toys bringing him there. At that moment, living toys arrive that require Santa to give a gift to Christmaster, but Santa refuses, stating that he has to wait for Christmas. However, there is an exception for the best-behaved child in the world, the same thing Marinette had told Chris. Since Philippe is the only one able to move on the ice, he entertains the toys (ending up being captured) while the heroes bring Santa to safety.

Cat Noir wears Santa's hat to be followed by living toys, while Ladybug and Santa Claus move away. They find Nino desperately looking for his younger brother, since he disappeared along with some of his toys, confirming to Ladybug that Chris was akumatized, and it was he who caused all that disaster. Ladybug uses Lucky Charm which gives a stationery set, and she writes what she would like; since Ladybug is at the top of the list of the best, she has the right to receive a gift in advance. Santa takes her list and discovers that Ladybug has asked for whatever Chris Lahiffe wants. After warning her that that would be the only gift she will receive this year, Santa grants Ladybug her wish. The gift is taken by a toy that is brought to Christmaster, allowing Ladybug to follow him. Cat Noir has been captured by toys. Hawk Moth orders Christmaster to take his ring, but Ladybug intervenes.

Christmaster animates a toy version of each of the superheroes, which can use their special powers over and over again. Santa Claus intervenes and gets rid of the two toys. Christmaster brings to life the toy he had received, making it huge. With a ploy, Ladybug tells him that if he does not give her his snow globe (containing the akuma) then Cat Noir will destroy the robot with the Cataclysm. Despite Hawk Moth trying to dissuade him, Christmaster reluctantly gives his globe, which is destroyed by Chat Noir, freeing the akuma that is then purified by Ladybug. The two heroes say goodbye to Santa Claus and then Ladybug puts Paris back to normal. Hawk Moth claims that Ladybug deprived him of his Christmas presents; however, his birthday is near, and it will be a day Ladybug will never forget.

Marinette babysits Chris again, and the two promise to always tell each other the truth. When Chris asks again what is in the chest, Marinette starts to explain it to him, but by mentioning her crush on someone, Chris starts to complain because he doesn't like romantic things. Marinette continues talking about her crush, hamming it up for extra effect.