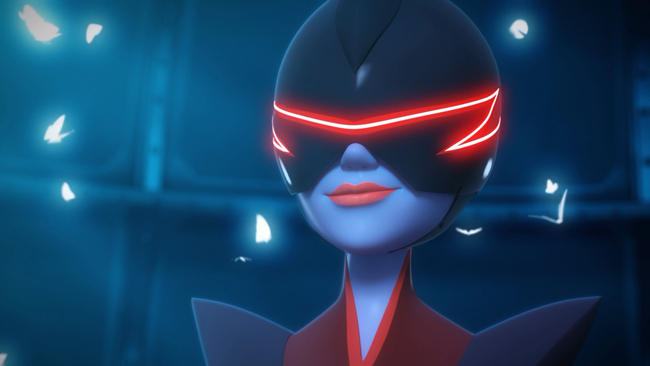 This episode is also the 1st part of the Season 2-based 2-parter, "Heroes' Day."

Marinette lies about preparing a good deed to perform for others on the Day of Heroes and quickly finds her untruth spinning out of control.[7]

After facing another supervillain late at night, Marinette and Adrien go home and fall asleep. However, they are soon awoken only seconds later and reminded that it's Heroes' Day: a day where every Parisian has to do a good deed in honor of their superheroes. Marinette panics since her time as Ladybug prevented her from preparing hers, but she is saved by Tom and Sabine, who give her a box of macarons to give to her classmates.

Meanwhile at the Agreste mansion, while getting ready for school, Adrien sees his father through his bedroom window staring at a stone statue of Emilie Agreste. As he goes downstairs, Nathalie tells Adrien that she booked the Chinese and fencing rooms for him as he requested and reminds him that he much also make an appearance at the Agreste Foundation's Heroes Day Gala. After Adrien leaves for school with his bodyguard, Nathalie goes to talk to Gabriel and tells him that it's time to implement his plan, pointing out how his target, Lila Rossi, has had months to brood her anger over Ladybug. It will be peaked now that everyone is celebrating her on Heroes Day. Gabriel asks Nathalie if she's really okay with helping him, to which Nathalie says that she'll always be there for Gabriel.

At school, Lila speaks to Miss Bustier's class through a video chat. She tells them that she is in the country of Prince Ali (The Kingdom of Achu) and had been invited by him to his palace. Marinette, aware of Lila's deceitful nature, attempts to expose her lies by pointing out that Prince Ali is in America, but Lila says that Prince Ali wasn't actually with them. Marinette vows to herself that she'll expose Lila's lies one day, but Alya, who overhears, believes that Marinette is just jealous because Lila had once tried to date Adrien. When asked by Miss Bustier what she has prepared for Heroes' Day, Lila says that she has received permission from other countries to work on a project to reduce pollution and is meeting with Prince Ali to get his approval. The class and Miss Bustier, excluding Marinette and Adrien, are amazed and thank her on behalf of planet Earth. She then claims that she has to go because it is getting late where she is. Once she hangs up, it is revealed that she actually still lives in Paris and is hiding in her room. When her mother comes in and asks who she was talking to, Lila says she was talking to her boyfriend, Adrien. Lila's mother also asks her about the school, which Lila claims is closed from all the akuma attacks. Lila's mother then receives a call from Mr. Damocles, but Lila convinces her not to answer it since he's probably been akumatized. The two are then interrupted by the noise of the ongoing Heroes' Day Parade, which irritates Lila.

Miss Bustier tells the class that even if they don't have Prince Ali as a friend, there are other ways to do good deeds. Mr. Damocles bursts into the room dressed as The Owl and talks about how Ladybug and Cat Noir have saved Paris from Hawk Moth. He then asks everyone what heroic deeds they're doing. Nino says that he will be playing music for the retirement home. Adrien says that he will give a Chinese lesson to his fencing class and a fencing lesson to his Chinese class. Alya says that she has met with the mayor to discuss building handicap facilities. Hearing everyone's good deeds makes it hard for Marinette to admit that all she did was bring macarons for the class. Chloé mocks Marinette for doing so little, but Alya defends her by saying that it's better than nothing. Angry that Alya would imply that she didn't prepare anything, Chloé says that since she is a superhero, she is offering her autograph to anyone who wants one. However, Marinette still feels embarrassed by not having much done, so she tells the class that she is organizing a party for the whole school with countless amounts of pastries.

Once home, Marinette asks her father for help in making the treats, but he cannot since he has to finish baking a giant Ladybug cake for the mayor. Sabine advises Marinette to just be honest with her classmates, but Marinette decides to make the treats herself instead.

Nathalie and Gabriel wait inside the lair for the first part of their plan to unfold. In her room, Lila angrily scrolls through a bunch of news feeds about Ladybug until coming across an interview with Gabriel and Nadja Chamack. In it, Gabriel announces that he is funding a tribute to Ladybug due to her saving him and his son countless times. After he says that Volpina is a false hero in comparison to Ladybug, Lila becomes enraged and flings her laptop against the wall. With her negative emotions hitting their peak, Gabriel transforms into Hawk Moth and sends an akuma to Lila. It infects her wristbands and Hawk Moth offers her the power of illusion once more. Lila agrees, and she is transformed back into Volpina.

With her illusionary powers, Volpina sends an illusion from the Eiffel Tower: an akumatized Ladybug with inverted colors and Cat Noir appear on a Ladybug float.

With the people of Paris drowning in despair, Hawk Moth seizes his opportunity to continue the second part of the plan. He deakumatizes Lila and then creates another akuma in his lair for Nathalie. It infects her tablet and transforms her into Catalyst, a supervillain who has the ability to boost powers. Catalyst infuses Hawk Moth's cane with energy, which transforms him into Scarlet Moth, allowing him to release as many akumas as he desires. With his boosted powers, Scarlet Moth sends a swarm of akumas all over the city.

Marinette, who is at home, continues to attempt to create her Heroes' Day pastries that she promised her classmates but has trouble with the task. She pleads with Tikki to let her transform into Ladybug and use her Lucky Charm to help her with her task but soon realizes that she can't use her powers for her own personal needs. Tikki encourages Marinette to just be honest with her classmates, but Marinette is worried about ruining the party. However, Tikki assures her that nothing can ruin the party on Heroes' Day.

Marinette returns to school, dreading returning to disappoint everyone, just as Adrien catches up to her and tells her he will be able to come to her pastry tasting. Noticing how nervous Marinette looks, Adrien fears that Marinette doesn't have enough food for him, but Marinette assures him that she does. Once inside the building, the two find themselves with bigger problems, as numerous students have seen the illusion fight between the "akumatized Ladybug" and "Cat Noir". In the middle of a live interview between Nadja Chamack, Jagged Stone, and Clara Nightingale, the three are akumatized back into Prime Queen, Guitar Villain and Frightningale respectively as numerous red akumas descend on the school and also akumatize other students and staff back into their akumatized selves. Adrien saves himself and Marinette from akumatization. Chloé tells everyone not to panic as she knows what to do and rushes home. Marinette realizes that the akumas are infecting those who are afraid and warns the other students not to show fear. Juleka is nearly akumatized but after hearing Marinette's warning, she calms down. Alya and Nino also comfort one another to prevent themselves from being afraid. Alya then calls her sister Nora and tells her not to be afraid, but Nora confidently tells Alya that fear is afraid of her as she smashes a bunch of akumas with a broomstick while their younger sisters cheer her on. Meanwhile, Marinette runs into the bathroom to transform into Ladybug and heads straight to Master Fu for additional help.

Adrien tries to find a place to transform but is soon captured by his bodyguard, who has turned back into Gorizilla. By Scarlet Moth's command, he forces him to keep Adrien safe while instructing Sabrina, now Vanisher again, to follow Ladybug to Master Fu. As Gorizilla takes Adrien away from the battle, Plagg sneaks behind the villain and blows on the ground, causing it to crack which makes Gorizilla trip and drop Adrien. Once he gets away from Gorizilla, Adrien transforms into Cat Noir.

Meanwhile, a suspicious Ladybug realizes that she's being followed and ducks inside of a sewer. She sees Vanisher's footprints in the water, uses her yo-yo to tie her up, and then purifies her akuma, turning her back into Sabrina. Sabrina is delighted upon seeing the real Ladybug and promises to tell everyone the truth while Ladybug heads over to Master Fu. Once there, Master Fu voices how much he's feared the day Hawk Moth would realize how much power he actually has and then takes out the Miracle Box for Marinette to choose a trusted ally to help her. Tikki advises Marinette to take all the Miraculouses, but Marinette points out that she won't have time to explain to everyone what to do and says that she needs allies that already know what to do. She picks up the Fox Miraculous for Alya, Bee Miraculous for Chloé, and Turtle Miraculous for Nino.

Afterwards, she gets a call from Cat Noir informing her that there are many villains and that Hawk Moth overdid himself. Then, he is approached by the heroine expecting him to do the same thing and is given the Bee Miraculous. Meanwhile, Ladybug finds Alya and Nino hidden back in the school's lockers. Lacking a good excuse to separate them, she gives them their respective Miraculouses, revealing their superhero identities to each other. Nino is surprised that Alya is Rena Rouge and even more surprised that she never told him, but Trixx reminds him that a superhero must keep their identity secret before Alya transforms into Rena Rouge. Nino is impressed but wonders why Alya is not surprised that he is Carapace. She merely tells him to transform. After he and Wayzz greet each other with a handshake, Nino transforms into Carapace.

Chloé, in the meantime, has set up a "Bee Signal", somehow unconvinced of the parade fight. Cat Noir shows up and Chloé is annoyed that Ladybug sent over her "second fiddle". When Cat Noir threatens to find another Queen Bee, Chloé takes back the comment and tells him to give her the Miraculous. Cat Noir coerces Chloé to ask for it politely before giving it to her. After being greeted by Pollen, Chloé transforms into Queen Bee.

With all five heroes united, they arrive at the Trocadéro, where Queen Bee asks why they are waiting, with the akuma army nearby at the Eiffel Tower. Ladybug retorts she wants to wait to see what they are planning just as Scarlet Moth arrives, apparently out of his lair, with Catalyst remaining behind. He broadcasts himself on TV and asks Ladybug and Cat Noir how they plan to fight his massive army. As the heroes bicker how they will approach the fight, Cat Noir asks Ladybug what her plan is while she looks on wordlessly.