Casey Mongillo is an American voice actor, having appeared in animation and video games. Mongillo is also an avid drummer, pianist, and singer.

They voice Sandboy in the English dubbed version of Miraculous: Tales of Ladybug & Cat Noir.[1][2]

Casey Mongillo has voiced a number of characters in anime, such as Shou Suzuki from 'Mob Psycho 100, Nicol Amalfi from Gundam SEED HD Remaster, and most recently the role of Kirisame from the Netflix anime B: The Beginning. For video games, they have voice roles such as Vernon Cherry from Red Dead Redemption, Zoe in Monster Prom, multiple characters in Shadowverse, and Nate and Tim in Octopath Traveler. 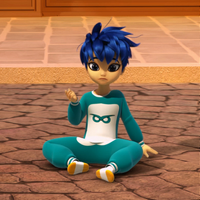 Retrieved from "https://miraculousladybug.fandom.com/wiki/Casey_Mongillo?oldid=515196"
Community content is available under CC-BY-SA unless otherwise noted.