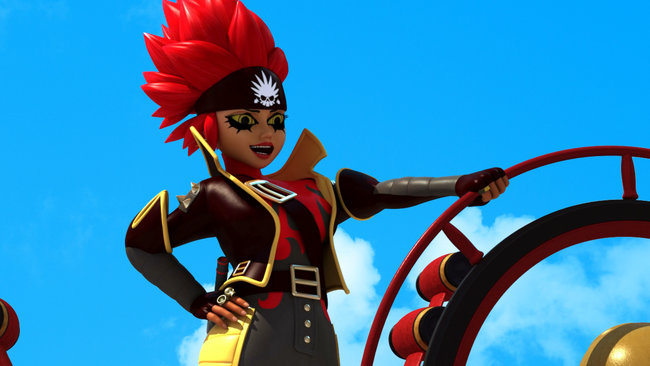 Juleka's mother gets akumatized into Captain Hardrock; steering an inpregnable ship and armed with a pirate sword, she wants to blast her music across Paris.

Marinette, Alya, Nino, Rose, Juleka, Ivan, and Mylène are all helping to set up the Couffaine houseboat for a music festival. While cleaning up, Marinette expresses worry since Adrien has not shown up yet. Alya reassures Marinette that Adrien will arrive soon and just to make certain asks Nino when Adrien will arrive. Nino explains that Adrien had something to do with his father, but he will come right after. Suddenly, Juleka’s mother, Anarka, arrives on the scene and after seeing that Marinette is cleaning the houseboat, she tells her not to as her family likes the “lived in” look.

At the Agreste mansion, Adrien is playing the piano for his father and Nathalie, but accidentally makes a mistake. Gabriel tells Adrien to stop and asks if he has been practicing. Adrien believes that he’ll improve when he gets a chance to perform with his friends, but Gabriel tells him that Agrestes are soloists, not group members, and to practice some more to show him later. Adrien reminds his father that he promised that he’d let him go to the concert with his friends, but Gabriel says after Adrien’s performance, he needs to regain focus. He then leaves Adrien’s room with Nathalie.

Nino gets a phone call from Adrien, who tells him that he can no longer come to the concert, which Marinette and Alya overhear. Marinette is upset over missing a chance to hang out with Adrien. Alya reminds Marinette that it’s not the first time Adrien’s dad stopped him from hanging out with his friends. Suddenly, Anarka arrives on the scene and spots Alya putting a metal statue on top of the ship’s compass. She explains that metal must never come near a compass since it attracts the needle. Marinette compares herself and Adrien to the compass and statue, believing that she is the statue and Adrien is the compass since they may be meant to stay apart. Alya, however, believes that Adrien is the statue and Marinette is the compass that goes crazy whenever he’s near. She then reassures Marinette that they’ll be other chances, but Marinette isn’t convinced. Rose then pops in and says that while everything is ready, Luka appears to be missing. Anarka asks Marinette to go get Luka, which Marinette, in turn, asks who Luka is. After Anarka explains that Luka is her son and where to find him, Marinette goes to get him.

Marinette goes down to Luka’s cabin. After seeing him sitting cross-legged on top of his bed, she unintentionally stutters while trying to introduce herself and says that everyone is waiting for him. Luka says hello and playfully teases her stuttering, but quickly apologizes and explains that he usually makes more sense with his guitar, which he begins to play. Marinette sits down on Luka’s bed and listens. She is amazed by his talent. Luka explains that he finds music to be simpler than words. Marinette gets off the bed and walks over to a picture of Jagged Stone and Luka's collection of guitar picks. She picks up a Jagged Stone guitar pick. Luka and Marinette both express that Jagged Stone is their favorite singer. Then Luka tells Marinette she can keep the Jagged Stone guitar pick. He says to Marinette that he is going to join the "groove"; a reference to when Marinette was trying to say the group, but she said groove instead. Feeling embarrassed, Luka makes Marinette feel better by complimenting she is a funny girl. Marinette looks at Luka while he walks away and she looks at her new guitar pick before putting the guitar pick in her pocket.

Back in Adrien's room, Adrien is watching the news about the music festival. Nadja Chamack and André Bourgeois are discussing the list of performers, such as Jagged Stone and XY. Nadja mentions the music festival could the biggest music festival since the event's debut in 1982. Plagg tries to cheer Adrien up by pointing out the bright side of seeing all of the concerts in his room. Adrien tells Plagg he only wanted to see his friends' concert. To try to cheer Adrien up again, Plagg performs a private concert with him singing about his love for cheese. Although Adrien appreciates Plagg for trying, he is still sad and he goes back to practicing the piano.

Marinette joins everyone on the boat, where Luka is playing on his electric guitar. Alya notices Marinette and Luka are looking at each other and she comments that Marinette has found a new "statue." Marinette, however, denies this. Anarka tells the band to give them a show whenever Luka is ready. Luka pulls off a big sheet covering the tall speakers. Mylène then gives Alya and Marinette earplugs and tells them that they are going to need them. After they put them on, Luka sherds his guitar which makes a very loud sound that’s enough to make cars on the streets go flying.

Alya, Marinette, and Nino are shocked by how loud it was. Police helicopters, boats, and cars rush over to the houseboat and Roger Raincomprix comes out. He proclaims that Anarka’s volume is too high and she’ll have to play something else. She, however, refuses. Roger threatens to shut down her concert if she doesn’t turn down her volume. She continually refuses to change anything. As a result, he writes up a couple of tickets for her. Anarka rips up the tickets while she laughs. Raincomprix is so frusturated he begins to write even more tickets.

In his lair, Hawk Moth senses Anarka's irritation and he sends an akuma to her. The akuma possesses the Liberty's binnacle and transforms her into Captain Hardrock. When the band refuses to play, Captain Hardrock tells the Liberty to bind them in chains and throw them down into the hold. Captain Hardrock fires speakers onto the Eiffel Tower, where Jagged Stone was performing. Harsh noise is emitted from the speakers, which forces the preformers to leave the general area. Adrien sees the news alert in his room about the warning. Adrien transforms and leaps through his window to confront her.

Down in the the hold, Tikki winks at Marinette from her bag and magically opens the lock imprisoning her and Luka. With the chains loose, he asked Marinette how she managed to do it, with her claiming that she used the guitar pick he gifted her earlier to pick the lock. Luka is amazed and compliments Marinette. Alya gets them to focus on their predicament next, but when they're about to free the others, Captain Hardrock goes to the hold and sees them escaping, missing the chance to free the others.

She breaks into Luka's room as he was shouting out the open window, suggesting Marinette escaped through it. Captain Hardrock commands the ship to re-capture Luka. She looks through the window, but doesn't see Marinette, so she goes back abovedeck. Marinette pushes a cabinet under Luka's bed, revealing that she was hiding inside of it. Marinette transforms.

Up on the main deck, Captain Hardrock shot her speakers at the XY stage. The noise again forced the people around to flee. While looking for more performers to sabotage, she sees Cat Noir and begins to shoot at him. When he lands on deck, the Liberty manages to capture him. But Ladybug arrives just in time to break him free.

As Ladybug and Cat Noir begin to fight off the Captain Hardrock's attacks, Roger and other officers try to tell Captain Hardrock to stop her attack while chasing her in their boats. Captain Hardrock blasts them out of the water and Ladybug uses her yo-yo to catch them.

Ladybug and Cat Noir continue to fight Captain Hardrock as they try to find her akuma. While they are talking, she blasts the speakers onto Clara Nightingale's preforming area. Cat Noir and Ladybug try to take the ship off of its course in vain. Captain Hardrock responds by telling them that the ship only responds to her.

As Cat Noir is fighting Captain Hardrock, Ladybug goes into the hold to save the rest of her classmates. After she frees them, Luka asks if Marinette is alright. Ladybug responds by saying she is the one who alerted her. She blushes as Luka says that she is brave. Cat Noir is captured by Captain Hardrock and Hawkmoth reminds her to take his ring. Just as she reaches for the ring, Ladybug pulls her down from the mast she bound Cat Noir to. Roger attempted to follow the Liberty and throw Captain Hardrock on a paddle boat. She blasts him out of the water again, but Ladybug and Cat Noir end up hiding.

Ladybug and Cat Noir are on the bow of the ship. She uses her Lucky Charm to tie Captain Hardrock to the ship, which spins in circles because of the compass. The ship then stops at land and Cat Noir uses his Cataclysm to destroy the ship. Ladybug purifies the akuma and uses Miraculous Ladybug to return the city to normal. Back at the Agreste mansion, Adrien asks his father to play a piece as a duet, and Gabriel agrees. Finally, Adrien is allowed to go to the concert. He hugs his father before setting off.

Meanwhile, Roger Raincomprix is checking the noise level, and he agrees to allow them to play at the music festival. Then Adrien comes and accidentally knocks over a box containing a keyboard. Adrien calls it an original ZX20.4 keyboard in shock making it sound like it is a rare or at least a very good keyboard. He says he knows how to play it, and joins the concert before the end card appears.