Caleb Yen is an American voice actor. He voices Cash/King Cash in the English dubbed version of Miraculous: Tales of Ladybug & Cat Noir.[1]

Yen mostly plays minor voice roles in many anime series, but some of his known major voice role include Jun Dojima in The Gymnastics Samurai, Shou Kawakai in Stars Align, Tetsuro Arahabaki in No Gun Life, and Laudisch in Legend of the Galactic Heroes: Die Neue These. He also voiced Arthur, Slumbering Dragon and Shao, Shady Apothecary in Shadowverse, Ayer in Granblue Fantasy, Scottie in Scottie and Otachan, and Bamboo in The Legend of Hei. 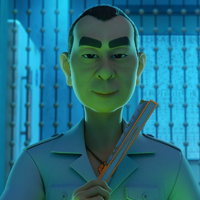