Butterfly Sentimonster is a giant buttefly-like/moth-like Sentimonster created by Mayura from Hawk Moth's despair to save him from being unmasked.

It also makes an appearance in "Miracle Queen" using its stinger to attack Jade Turtle and escape through fast-flight with Mayura and Hawk Moth, but this time is from Hawk Moth's determination.

As it represents a butterfly or a moth, it has largely sized dark purple wings with black and a white dot spots with gray edges at the end. It has a magenta head with teal eyes with large dark yellowish-green antennas with the body having purple fur with black stripes with some yellowish-green spikes with each side of the body and large dark purple arms with the tail being violet.

It isn't much known about the butterfly sentimonster, but is known to hit aggressively and follow Mayura's orders accordingly. It also has an attack screech.

In Mayura is revealed to have the power to cause extreme winds that blows the heroes out of the Eiffel Tower by flapping its wings.

In "Miracle Queen" is known to possess a strong stinger that uses it to attack Jade Turtle's Shell-ter it also flies extreme speeds. 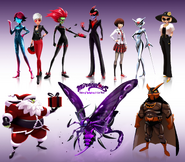 Concept art for the Butterfly Sentimonster for Season 2.

Concept art for the Butterfly Sentimonster for Season 3.
Retrieved from "https://miraculousladybug.fandom.com/wiki/Butterfly_Sentimonster?oldid=735376"
Community content is available under CC-BY-SA unless otherwise noted.