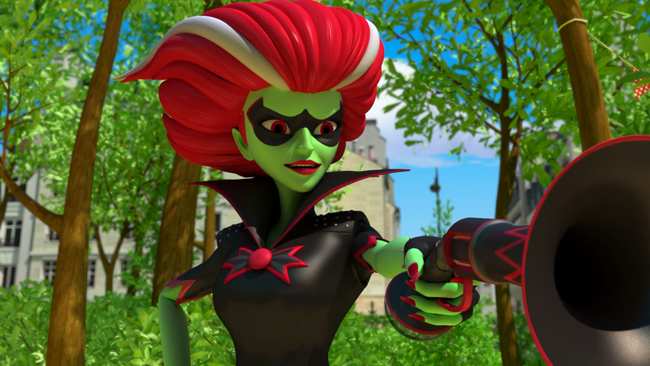 When Marinette elects to hang out with her friends on her birthday instead of her grandmother, grandma is akumatized into a candy-gun-wielding baddie.[7]

Marinette's grandmother gets akumatized to Befana. Armed with a pistol, she wants to turn her into rock statue by revenge on Marinette for lying to her. [8]

It's Marinette's birthday! To celebrate, Tikki creates a special charm called a Kwagatama to give as a birthday gift. She tells Marinette that kwamis have given their holders gifts for years and is happy to be her kwami, but Marinette is distracted. Tikki is hurt that Marinette wasn't paying attention and believes that she doesn't like the gift, but Marinette apologizes and quickly explains that she was thinking about a surprise party her classmates were planning. Marinette tells Tikki about the different things she's seen around the school (Juleka holding a bike pump at school, Nino listening to her favorite song, Adrien and Alya are whispering and act nervous when she arrives) and tells her that she believes Alya's story about having to go to the dentist is just code for a surprise party. To verify this, she asks her parents, and their guilty and nervous response confirms her suspicion. Elated that her classmates would do something so nice, Marinette rushes to the door to greet them when she hears the doorbell ring.

However, much to her and her parents' surprise, it is her grandmother Gina. Gina greets Marinette and gives her a shirt as a birthday gift. However, the shirt is for a much smaller child. She also gives Marinette the candy that she used to like as a child. Tom and Sabine try to convince Gina that Marinette is old enough to like new things, but Gina rebuffs her son and insists that they will have fun. Gina and Marinette leave on her motorcycle. Grandmother Gina takes Marinette to the park and to the zoo, still under the impression that Marinette is a small child. Meanwhile, Marinette worries that she was wrong about the party. She doesn't like the candy Gina gave her but is too polite to tell her so. Then Alya calls Marinette and asks her to come to "the dentist". Marinette is overjoyed that the party is still on and asks her grandmother if she can go. The two of them have a misunderstanding, and Gina thinks that Marinette is just making excuses to get out of their day. She returns home depressed. Sabine tells Tom to talk to her, but he accidentally destroyed Marinette's birthday cake. The two of them work to make a cake so the party will be saved and forget about Gina. Meanwhile, Gina discovers that Marinette was lying about eating the candy she'd given her. Hawk Moth senses her negative emotions and sends an akuma, which enters the candy tin. He gives her the ability to "punish the bad and reward the good" and akumatizes her into Befana.

Befana goes downstairs and turns Tom, who had tried to correct her, into coal. When Sabine objects, Befana tells her that she has always been sweet and turns her into a fairy. Befana commands Sabine to take her to Marinette. Marinette is having a wonderful time at her party and has just received a gift from Adrien when Befana attacks. Befana refuses to listen to her excuses and tries to turn her into coal. Instead, the shot hits Mylène. Adrien manages to get away and transform into Cat Noir. Befana's shot hits Adrien's gift, and she comments that Marinette doesn't deserve presents. Cat Noir confronts Befana, telling her that he likes that she wears black. She offers to help him wear white, as one of her fairies, but he rejects the offer, saying black brings out the green in his eyes. Befana sets Sabine on Cat Noir and continues to attack Marinette. Marinette is unable to transform and is in danger of being turned into coal. Alya and the other kids decide to rescue her themselves. Alya begins to throw dishes at Befana and is turned into coal. Then Kim tries to grab Befana's gun and is also changed. She orders the children to stand back, but Rose cries for her to leave Marinette alone, telling her that she was the sweetest girl in the world. Though Befana is annoyed that Rose spoke without permission, she thinks that Rose was sweet to defend her friend and turns her into a fairy.

Marinette attempts to transform but is interrupted by Cat Noir, who carries her off. Befana sends Rose and Sabine to attack them, but the remaining children lasso them with banners and try to stop them. Befana turns the remaining children into coal and heads off to get revenge on Marinette. Cat Noir takes Marinette to the Eiffel Tower and goes back to face Befana after wishing her a happy birthday. Marinette takes the moment of solitude to transform. Meanwhile, Befana goes throughout the town turning "bad" people into coal and "good" people into fairies. She is knocked off her bike in the midst of her song by Cat Noir, who makes up his own song. The song is finished by Ladybug, who arrives on the scene. Hawk Moth orders Befana to attack them, but Befana tells him to say the magic word, which he replies to with a "please." However, she decides to get Marinette first and heads off to the Eiffel Tower. Panicked, Cat Noir follows her, saying that he left the girl there. Ladybug almost tells him that she was fine by accident and follows him. Cat Noir tries to take control of Befana's cycle but is knocked off the bike and has to be rescued by Ladybug. Befana tries to turn Ladybug into an angel, saying she'd make a perfect minion, but Ladybug avoids the blast and manages to get onto the tower. Befana is angry that she rejected her "gift" and has her angels attack her. While the angels attack Cat Noir, Ladybug is chased up the tower by Befana, who fires on her. She fires straight into the air, and Ladybug manages to duck out of the way. The projectiles are pulled down by gravity and almost hit Befana, who is afraid of her own attack. Befana avoids the shots. She tries to shoot Ladybug but has to refill her gun. Ladybug tells Cat Noir that Befana is vulnerable to her own bullets. He comments that the akuma is probably in the candy tin. Ladybug uses Lucky Charm and gets a tuba.

Before they can use it, Befana's attack turns the ground under them into coal, and her angels push them through to the floor below. Surrounded by the angels, Ladybug and Cat Noir try to think of a way out as Befana moves forward. Ladybug notices the water main and discovers how she should use the tuba. To buy time, she surrenders and tells Cat Noir to show Befana where Marinette was. Befana puts off taking his Miraculous until she gets her granddaughter and tells the angels to guard Ladybug. However, Ladybug manages to tie them up with a fire hose. Nervous that he might accidentally betray Marinette, Cat Noir shows Befana a closet. He is relieved when Marinette isn't there. Befana accuses him of lying again, but before she attacks him, she hears the elevator go down and runs to meet it, thinking Marinette was in it. Instead, inside are her fairies, tied with the hose. Ladybug reassures Cat Noir that Marinette is safe and tells him to use his Cataclysm on the fire hydrant. She puts the tuba over the stream of water, and the water is redirected towards Befana. Befana tries to get away from the stream of water and shoots it with her gun, however, the water has covered her. The tuba, the water, and Befana are all turned into coal. Ladybug breaks the candy tin, captures the akuma, and uses Miraculous Ladybug to set things right. Hawk Moth promises that he will punish Ladybug and Cat Noir one day.

Back at the party, Gina flirts with André before Marinette pulls her aside to show her the bag cover she created with Gina's gift. Gina comments that Marinette has learned a lot since Gina's last visit, and Gina tells Marinette that for her next birthday, her gift will be a trip. Marinette thanks Gina but tells her that the gift wasn't important; the giver was. Sabine and Tom approach with the cake, and Kim and Ivan hold Marinette up to blow out the candles. Then Adrien gives her his gift again: a charm bracelet like the one she gave him in "Gamer". Marinette struggles to thank him, and her family enjoys watching her be happy.

As the party goes on, Marinette and Tikki talk about Adrien's gift. Marinette was happy that he made it himself, but Tikki called it strange. Marinette said Tikki’s gift was stranger, which angers her, but Marinette then reveals that she was wearing it as a charm necklace around her neck. She said that it was just as precious, saying that the gift itself didn't matter, but the person giving it. The episode ends with Adrien looking happily at the bracelet Marinette gave him.