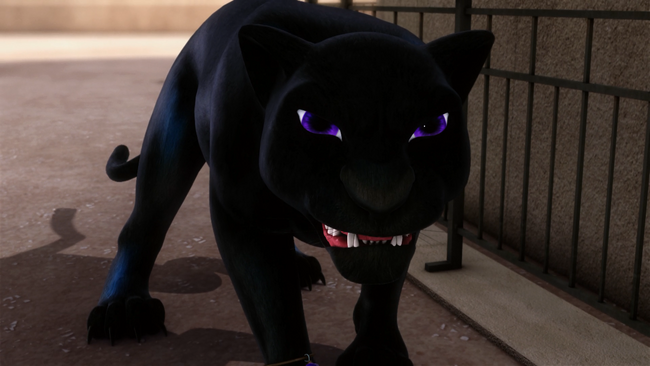 A humiliated zookeeper is akumatized into a villainous shapeshifting animal on a day when Marinette, Adrien, and friends are visiting the zoo in Paris.[8]

At the Collège Françoise Dupont courtyard, Marinette and Alya look through La Mode, a magazine Adrien models for. From a distance, Nino peeks at the girls. Adrien notices him eyeing Marinette. Nino admits to him that he has a huge crush on Marinette but is too shy to go talk to her. Adrien encourages him to ask Marinette out to the zoo to see the new panther exhibit. Nino begins to walk over to her but panics at the last minute and runs back to his best friend. Adrien smiles and assures his friend that he would be happy to help.

Later, Alya and Marinette are on their way home after school, still admiring the pictures of Adrien in the magazine. Distracted, Marinette accidentally bumps into Nino and drops the periodical from her hands. Stiff as a board, Nino does not move at all, prompting Adrien to come out from behind him and apologize on Nino's behalf. Marinette giggles at the sight of Adrien but then realizes that her magazine -- prominently featuring several pictures of Adrien -- is in plain sight. Attempting to be a gentleman, Adrien also goes to pick it up, and they bump heads, cuing another apology from Adrien. Hoping to get Nino to open up, Adrien suggests that they do something together to make it up to them, but Nino remains frozen. Adrien ends up inviting the girl to the zoo at four that afternoon. In a trance, Marinette agrees, then shakes in her boots when Alya tells her that Adrien just asked her out. Believing that she is about to have her first date with Adrien, Marinette begs Alya for help. Across town, Nino has the same reaction when Adrien tells Nino that he and Marinette would be alone together at the zoo.

Marinette arrives at the zoo and takes a seat on a park bench. Using an earpiece and microphone, Alya intends to coach Marinette on what to say while Alya herself remains out of sight behind a tree. Marinette spots Max and Kim who explain they came to see the new panther. Nino arrives shortly after, causing Marinette to question why Adrien is nowhere to be seen. Unbeknownst to her, Adrien is hiding in the bushes to coach Nino. Nino's nerves, however, still get the better of him and he winds up agreeing with her suggestion to wait for Adrien to arrive, much to Adrien's annoyance.

Elsewhere in the zoo, Kim and Max are looking at the new panther as she eats her meat. Max tells Kim how fast the panther can go. Unimpressed, he replies that could easily beat her. Otis Césaire, the zookeeper, grows aggravated by this comment and tells Kim not to bother the animal. Kim continues to taunt both the zookeeper and the panther by boasting about winning the County Athletics Tournament. Max then points out that it would be much more likely for the panther to eat Kim than to race him, but Kim ignores the comment. Once again, Otis tells Kim to stop bothering the animal, but he remains persistent in mocking the "poor tomcat" and her "cranky nanny" as he and Max walk away.

Meanwhile, Nino and Marinette continue to awkwardly wait for Adrien. Marinette asks if he's really arriving. Coached by Adrien, Nino replies back, "Yes, he is coming, but before I wanted to spend some time with you, too." Quickly after responding, he cracks and then reveals that he has a crush on a girl but is afraid to tell her. Marinette assures him there is no need to worry. Nino begins to confess to Marinette, but at the last second, changes the girl to "your best friend Alya", prompting three loud "What!?"s from Adrien, Marinette, and Alya herself. Marinette, however, likes the idea and offers to help get the two of them together. Contrastingly, Alya, who views Nino as a friend, feels everything but happiness with this development.

From his lair, Hawk Moth senses Otis's annoyance with the overly competitive Kim and sends an akuma to the zookeeper's bracelet. He offers the man a chance to put Kim in his place. Once the zookeeper agrees, he transforms into Animan, a shapeshifting villain who sets out after the boy. Animan releases the entire menagerie and, in the form of a panther, corners Kim and Max. He tauntingly tells them that he will give them a head start in their race.

Over at the benches, Alya again objects to Marinette arranging a date for her and Nino. Marinette tells her that he will be devastated if she were to refuse. Before they can carry on any further, they spot Kim and Max running for their lives from the zoo animals, led by Animan. Marinette and Nino rush away, and once she is out of sight, Tikki scolds Marinette for not respecting Alya's wishes before transforming her into Ladybug. Elsewhere in the zoo, Plagg changes Adrien into Cat Noir. The heroes find Kim, cornered by Animan. They distract the panther long enough for Kim to flee, and Ladybug incapacitates him by tying him up in her yo-yo, but before they can take his bracelet, the animals he freed come to his aid and force them to retreat. The heroes split up, realizing that it would be too much of a hassle to get all of them back into their cages. Ladybug spots Nino and Alya running for their lives, so she locks them in the empty gorilla habitat for their own safety while the animals are loose in the streets of Paris.

The heroes return to where they left the panther, only to find no sign of him. This confuses Ladybug, knowing that her wire is impossible to break. They decide that for the time being, the best course of action would be to find Kim. They eventually spot him, once again cornered by the panther atop a bridge. Cat Noir tells Kim to run but not before planting a tracking device on him. Ladybug again ties Animan up in her yo-yo, but he simply turns himself into a bald eagle and flies off towards Kim. Cat Noir uses his tracking device to find Kim desperately begging for help from the owners of the Tom & Sabine Boulangerie Patisserie. Recognizing that their foe probably has a good sense of smell, Ladybug asks to see Kim's sweatband. She places it on a railing and sprays herself and Cat Noir with a deodorant to hide their own scents. Sure enough, Animan -- now in the form of a ladybug -- flies to where the heroes placed the sweatband. Ladybug traps him in a tissue box, but he changes back into a panther and chases the heroes into an empty bus with the doors locked.

The duo struggles to fight him as he changes into a variety of animals, gradually getting slower each time. Ladybug figures out that the transformations must be tiring him out. Cat Noir activates his Cataclysm to make the bus go haywire. The doors are wide enough to give the heroes a chance to escape but not a tired grizzly bear. At first, it seems that he has successfully been worn out, but just as they are about to take the bracelet from the sleeping panther, he transforms into a Tyrannosaurus Rex. Ladybug summons her Lucky Charm, and, as usual, is confused by the object -- this time, a car jack. She leaves it aside and realizes that her partner could use his cat-like agility to climb onto the dinosaur and distract him while she uses her yo-yo to tie him up for good.

With the Tyrannosaur defeated, Ladybug is confused as to why the Lucky Charm would provide her with something they did not need. However, when Cat goes over to retrieve the bracelet, he just narrowly avoids being chopped in half by Animan's massive teeth. Understanding at once, Ladybug charges at the T-Rex. Cat Noir is horrified as he watches the villain apparently swallow her whole. He prepares to attack but is relieved when he sees Ladybug, safe and sound, having used the car jack to open the dinosaur's mouth, retrieving the bracelet, and cleansing the akuma.

Ladybug throws the car jack into the sky, which repairs all of the damage done by the fight, returns the animals to their cages in the zoo, and turns Otis back into himself. She prepares to bump fists with her partner, but he is too relieved that she is all right that he embraces her before realizing that his transformation is about to wear off.

From his lair, Hawk Moth vows that he will get Ladybug and Cat Noir someday. Meanwhile, Ladybug turns back into Marinette, tiredly returning home and crashing onto her bed before receiving a call from Alya. Realizing that she left her two friends at the zoo, Marinette apologizes to Alya over the phone before catching up with her in front of the bakery storefront. The girls reconcile as Nino joins them, offering cookies. Nino comes clean to Marinette and admits that he used to have a crush on her before spending so much time with Alya. Funnily enough, as Alya and Nino admit, while they were locked in the same cage all day, they realized that they had a great deal in common. Alya also admits that she told Nino that Marinette had feelings for another boy but did not tell him who it was. She adds that while she was helping Marinette at the zoo, Nino was being coached by Adrien. Nino offers to talk to the "mystery guy", but Alya keeps him in line. Marinette giggles, and the end title card appears: Marinette imagining Alya and Nino smiling at each other in the gorilla habitat.