As depicted in the Miraculous spellbook, the owner has blue hair that is put into a bun, along with a peafowl/peacock feather flat against the top side of their head.

They appear to have a blue tube top. They have blue pants, and a side lighter blue skirt like a jazz skirt, possibly having a peafowl feather design. They have blue flats and a peacock cape resembling Mayura's skirt. 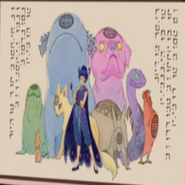