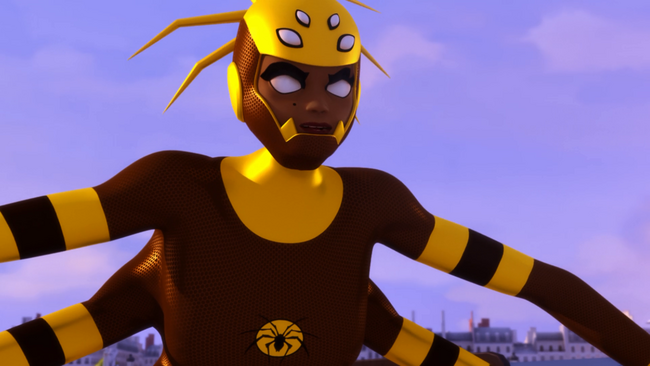 The episode starts when Nino and Alya are sync dancing to a game. Marinette is watching and admiring her friends' synchronization, while Adrien watches Alya and Nino dance on his cell phone since his father does not allow him to go out with his friends.

Adrien expresses hope that he'll have that same connection with someone one day, but not until his father starts letting him out of the house more often. Marinette asks Adrien if he really can't come with them. Adrien reminds Marinette of his father's overprotectiveness but believes that he'll eventually realize that he's no longer a child.

Soon after Nino and Alya finish the game, Alya's older sister Nora walks in, just recently returned from a boxing match. Wondering why they were up so late, Alya reveals that she and her friends were spending time together before it grew dark so that they could watch the World Cup fireworks on the Ferris wheel.

Nora argues against this, believing that it is too dangerous for Alya since there's been a lot of akumatized people in Paris lately and Alya should stay home where it's safe, as she has been in direct danger for quite a few times. In "The Pharaoh" she almost got sacrificed, in "Prime Queen", she was about to be pushed into the Seine river while locked in a mummy-shaped coffin, and in "Befana", she was turned into a coal statue.

Alya stands her ground, even reminding Nora that the twins were akumatized right at home. Nora, however, believes that wouldn't have happened if she'd been around since she always looks out closely for her family, and she hates people messing with her family.

This prompts Marinette and Alya to recall a time where Nora mistook a man in a banana costume who was handing out flyers for an akumatized victim and attacked him. Embarrassed, Nora claims that it was an honest mistake and says that unless they learn to defend themselves, they must stay where it's safe. Nino claims that he can protect Alya if she's ever in danger, but Nora merely laughs this off. Nora would allow Alya to go out with Marinette and Nino if Nino could win in an arm wrestle with her, but that would be impossible since Nora's way too strong, as she does boxing frequently.

With things looking that they would have to go without Alya, Marinette suggests that Nino can beat Nora in an arm-wrestling, adding that he was stronger than he looked. Alya doesn't want the two to arm-wrestle over her, since Nora would beat Nino with ease and Adrien even warns Nino of Nora's strength and she could injure Nino, but a match is still declared.

With Adrien serving as referee, Nino and Nora starts arm-wrestling, but Nino fails to pull Nora's arm down. Marinette distracts Nora by pretending to see an akuma by announcing it out loud to everyone in the apartment. She pulls Nora’s arm down when no one is looking, so Nino is declared the winner and Nora "lost" the challenge. Despite Nora insisting that they cheated, Alya became fed up with Nora's overprotective big sister mothering. She says she's going out with her BFFs and she does not care what Nora thinks, so Alya leaves with Marinette and Nino to watch the fireworks on the Ferris wheel.

Sensing Nora's anger, Hawk Moth sends an akuma after her. It infects her boxing helmet and Hawk Moth offers Nora the power to show her sister how dangerous the world can be in exchange for Ladybug and Cat Noir's Miraculous. He gave her the power of superhuman strength and Nora accepts the deal. She's transformed into Anansi, a giant spider woman.

Meanwhile at the Ferris wheel, Marinette, Alya, Nino, and Adrien on the phone are watching the fireworks, though Nino sulks for feeling like he can't protect Alya but still insists that he would if such moment came. Soon after, by Adrien's warning, noticed that a new akumatized victim is attacking the Ferris wheel.

Faking a loss of signal, Adrien hangs up and transforms into Cat Noir. Alya, Nino and Marinette realized that the akumatized victim is really Nora when she climbed up the Ferris wheel. With her huge superhuman strength, Anansi carried the entire cable hanging from the Ferris wheel with four of her strong arms and she jumped a great height from the top to the bottom, placing the cable down with a loud crash.

When the others were attacked by Anansi, Cat Noir soon comes to rescue them by saying that Anansi destroyed his scratching post with all of those convenient arms she has, but Anansi retaliates forcefully, punching Cat Noir with all six of her arms while he dodged all the attacks. Anansi managed to kick him and grab his ankle, throwing him in the centre of the Ferris wheel.

Cat Noir landed on his hands and feet after he was thrown. When Anansi attempted to punch Cat Noir from there, Cat Noir dodged her attack and she punched the centre of the ferris wheel really hard that the gigantic wheel section came off and started rolling towards the river, forcing Cat Noir to save the people inside by chasing the Ferris wheel.

While Cat Noir made an attempt to distract Anansi, Marinette and Nino managed to escape the cable, but Alya was still trying to climb out of the cable. Suddenly, Anansi jumps on top of the cable and takes Alya with four of her arms. After briefly making fun of Nino, she flees with her hostage by jumping up a tall structure and further away, spitting webs as she jumps further back. Nino follows in an attempt to save Alya and angrily tells Marinette off when she tries to persuade him to stay away. Realizing that she messed up, Marinette hides and transforms into Ladybug.

Ladybug arrives to Cat Noir's side just as he finishes saving the passengers of the Ferris wheel, and the duo take off to find Alya and Nino. They soon find themselves in an archway where Anansi had created a giant spider web and stuck Alya at its center. Nino attempts to get Anansi to let Alya go, but she responds by throwing him in the air. Ladybug saves Nino just in time and tells him to leave Anansi to the professionals, but Nino follows Ladybug and Cat Noir back to where Anansi is.

Ladybug instructs Cat Noir to go save Alya while she distracts Anansi but unfortunately, Cat Noir gets caught in the web, too. Between trying to save Cat Noir and keeping Nino safe, Ladybug calls for her Lucky Charm and receives a candle. Ladybug quickly realizes what she must do, but hesitates because of the current situation.

Nino offers to help, but then expresses doubt over whether he's actually capable of helping since he's not physically strong, but Ladybug assures him that courage and determination also determine strength. She gives him Cat Noir's staff and tells him to use it to distract Anansi while she's gone. Nino agrees and Ladybug takes off.

Anansi tries to find Cat Noir's earrings, unaware that his Miraculous is actually the black ring, until Hawk Moth clarifies this for her. But before she can grab it, Nino challenges Anansi once more and uses Cat Noir's staff to fight her off.

Ladybug returns to the scene just in time to save Nino once again. With him gone, Anansi prepares to take Cat Noir's Miraculous, but he calls on his Cataclysm before she can. Hawk Moth tells Anansi that the Cataclysm would destroy anything it touches, even her, so she has to wait until Cat Noir detransforms before taking it from him, and she reluctantly agrees.

Ladybug asks Nino to help her again, to which he agrees. Ladybug presents him with the Turtle Miraculous and Nino opens up the Miraculous box. Wayzz appears and Nino asks him if he's a genie, to which Wayzz replies that he's actually a kwami and although he can't grant wishes, he can give him superpowers. Ladybug tells Nino that he must return the Miraculous to her once the mission is over. Nino understands and transforms into a turtle-theme superhero.

Ladybug then calls on her Lucky Charm again, receiving boxing gloves this time. While her new partner hesitates at the Lucky Charm, wondering if it means Ladybug should take Anansi head-on, Ladybug comes up with a plan and after telling the new hero that he must protect them when the time comes, the duo return to the scene.

While the new hero distracts Anansi, Ladybug uses her yo-yo to create a makeshift ring under the archway and taunts Anansi to a real boxing fight. Hawk Moth realizes that it's a trap and warns Anansi, but she doesn't listen, confident in her abilities. Rather than fighting, however, Ladybug makes use of Anansi's confidence and dodges every of her punches, causing the supervillain to punch the archway instead and make it crumble.

She and the new hero then reach Alya and Cat Noir and the new hero uses his power of Shell-ter to protect the group from the falling archway and free them from the spiderweb. Now freed, Cat Noir expresses worry about being replaced by a turtle, but Ladybug tells him now it's not the time to discuss this problem because Anansi would re-emerge soon. One of her legs is caught in the rubble, so Ladybug threw Cat Noir towards Anansi while she was re-emerging from the rubble and he used his power against Anansi's helmet, destroying it by making it shatter into pieces after it was touched by the destructive power. The akuma flies out of the helmet.

Ladybug purifies the akuma by capturing it with her yo-yo. Then she uses Miraculous Ladybug to fix the damage. The streets were free of cobwebs and the ferris wheel was back into its original place. Nora was de-akumatized and Paris was saved by Ladybug, Cat Noir, and the new superhero.

Unable to fist-bump with Ladybug due to his ring beeping, signaling that he will detransform soon, Cat Noir prepares to take off, but before he does, Ladybug reminds him that he's irreplaceable. Ladybug then fist-bumps with the turtle-themed hero and Alya, who is recording everything for her Ladyblog, asks for the hero's name. He introduces himself as Carapace before taking off with Ladybug.

In an alley, Carapace detransforms and Nino gives the Turtle Miraculous back to Ladybug. Nino thanked Ladybug for believing in him and Ladybug in turn assures Nino that he was a true superhero. Hawk Moth comments on how Ladybug may be gaining more allies, but eventually she may still find herself outnumbered one day.

Marinette and Nino rush back to where Alya and Nora are. Nino pretends as if he doesn't know what happened and asks if everyone's okay. Alya reassures him that she's fine and tells him that she saw him try and save her.

Nora came towards them and apologizes for all the trouble she caused, admitting that she did lose the match against Nino. However, Marinette admits that she helped Nino win and apologizes for distracting her. Nora assures her that everything is good between them and then Nino suggests to bring Nora along when they go to the ice rink next week. Alya finds this to be a great idea since she hasn't spend time with her big sister in a long time, while hugging her and saying that she's the best big-sis ever. The end card appears with Marinette, Nino, Alya, and Nora on an ice skating rink.