He voiced Chris Lahiffe in the English dubbed version of Miraculous: Tales of Ladybug & Cat Noir.[1]

Alejandro has found much success as a voice actor, having done work at a multitude of studios such as FUNimation, Bang Zoom Entertainment!, Okratron, RoosterTeeth, etc. for various anime/video games. He's lent his voice to projects such as Dragon Ball Legends as Shallot, My Hero Academia as Naomasa Tsukauchi, My First Girlfriend is a Gal as Junichi Hashiba, Nanbaka as Uno, Akiba's Trip: The Animation as Tamotsu Denkigai, Tokyo Ghoul RE: as Takeomi Kuroiwa, Cardcaptor Sakura: Clear Card as Takashi Yamazaki, Nomad of Nowhere as Red Manuel, RWBY as Henry Marigold, and many others. 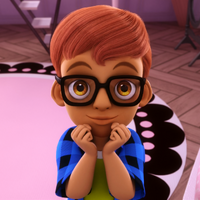 Retrieved from "https://miraculousladybug.fandom.com/wiki/Alejandro_Saab?oldid=454270"
Community content is available under CC-BY-SA unless otherwise noted.