To pizza, or not to pizza. That was the question. The class was throwing a party to celebrate their pass in exams (they all passed with high marks). Ms. Bustier allowed a little party for half the day. Everyone was busy setting up food on some tables, some set up games and Nino and Adrien were setting up DJ and music equipment on the teacher's desk. Even Chloe and Sabrina were there. But as usual, Chloe sat at her table and was checking something on her phone. Sabrina was trying her best to set up a cup game without bothering Chloe.

Chloe: *lowers her phone* What??

Sabrina: Could you pleease move your arm?

Sabrina: Thanks! *brings another cup stack*

Alya was guiding Kim, Ivan and Alix on bringing snacks.

Alya: Kim, you run to this store and being these items *points on a map and gives him the shopping list*

Alya: Ivan, head down to the bakery and bring these things.*gives him the list*

Alya: Alix, your the fastest. Don't tell Kim that. Here's the list you have to bring back from this store. *points on the map to a far off store* Can you do it?

Alix: I'll be back in a heartbeat! *takes off on her skates with the list*

Mylene, Rose, Juleka, and Marinette were busy with making and putting up the decorations.

Rose: Mylene that is sooooo pretty!!

Mylene: Thanks! Marinette did most of the drawings.

Marinette: Lets hang it up!

They all hang up the big 'Congratulations' banner in the back of the class, on the big bookshelf-wall.

Max and Markov were next to Alya, acting as a finance managers and was splitting the budget for party things. Everyone contributed and they got a big total. Max and Markov were doing calculations and picking spots to set up games and food, too.

Max: Let's see, the bakery goods will be around a this much *scribbles on his tablet*.

Markov: And the main courses will add to the total and that rounds up to this. *writes something and points*

Max: Of course! So that leaves us with more than enough for the rest of the things.

Adrien helped Nino carry in the boxes of records. Alya brought in the turntables.

Alix was the first to return with two huge bags full of yummy dishes in parcel.

Ivan came back with many big boxes of delicious smelling bakery goods.

Kim came back with balloons, streamers and other decorative things and party favours.

Marinette, Alya and the rest of the girls put up the decorations while Kim, Max and the rest of the guys set the tables. Marinette and Alya's desk and Adrien and Nino's desk were the snacks tables. Nathaniel and Ivan gave their desks for main dishes. Chloe and Sabrina's desk and Alix and Mylene's desk were set up with different games. Kim and Max's desk and Rose and Juleka's desk were moved to the side to make room for dancing and bigger games. The desks were put to the side to make a lounge. The entire classroom looked great. Only one thing was left.

Nino: But we neeed pizza!

Max: We have enough for five large pizzas!

Alya: We need a topping which everyone can agree on.

Adrien: How about.. cheese?

Alya: Is everyone okay with cheese?

Chloe: Noooo! I'm out of here!!*marches out*

Sabrina is about to follow, but Marinette stops her.

Marinette: You're not her slave, Sabrina. And you like pizza too. Stay. Please.

Sabrina: *smiles, nods and comes back*

The party is in full swing and everyone's having a blast. Except for Chloe, who eventually had to come back because she wasn't allowed to leave the school then. Everyone had fun insisting that she take a slice of pizza.

Alya: Hey Chloe, the pizza is great! Have a slice. Here! *shoves a plate to Chloe*

Every few minutes, someone would come up to Chloe and offer her some pizza. Sabrina, Adrien and Marinette were the only ones that ignored her and decided to have fun without involving Chloe's antics.

As lunch time approached, Alya got another idea. She knew that Chloe HATED soup too. She watched Marinette's great uncle compete and win the World's Greatest Chef show with his legendary soup. Marinette told Alya everything about Chloe that day. Alya pulled Alix aside and whispered a favour to her. Alix nodded and set off on her skates with a little bit of the remaining money they had. She came back with a big parcel with a note on it. Alya thanked Alix and took the parcel and the note. The note was from Alya's mom (Marlena, head chef of Le Grand Paris hotel). It read:

Hope you have a wonderful time! Enjoy the Legendary Soup!

Alya's mom learned how to make the Legendary Soup from Cheng Shifu after it became an official dish on the menu. Alya got a big, special pot of it made especially for the party (and to torture Chloe). For the rest of the party, everyone has fun offering Chloe soup and pizza and watching her refuse it like it was poison. Marinette was shocked to know that Alya went to suck extremes by ordering the soup to torment Chloe. But the soup was delicious and she couldn't help taking a serve. Same case with Adrien, but he couldn't resist the magical soup either. As the party (and school hours) came to an end, Chloe lost her appetite (permanently LOL), Plagg had his fill of cheese pizza (courtesy of Adrien), Kim and Alix had 3 eating contests (most of which ended in a tie), Alya had waay too much fun and her phone died (too much video) and everyone had a good time. Everyone was so exhausted, some kids fell asleep on the benches. And amongst the fallen students, Nino gasped and help back his laughter when she saw the most beautiful thing ever: Marinette fell asleep on Adrien. His arms were around her and she held him too.

Nino: Alya will kill me if I don't get this! *snaps a cute picture of it* Awww!

The next day, Nino called Alya aside.

Nino: Alya, check this out! *shows the Adrienette picture from the party*

Alya: *glasses break* *pterodactyl screech* *passes out* *jumps back to life* SEND. ME. THAT. RIGHT. NOW!

Alya: Thank you Ninooo!!!*dashes back full speed to class* MARINETTE!!

Marinette: Alya! What's wrong? Is there an alums alert???

Alya: No, but you'd better start explaining how THIS happened.*smirks and shows her the picture* Hmmm?

The End (for Marinette because Alya never let this issue go) 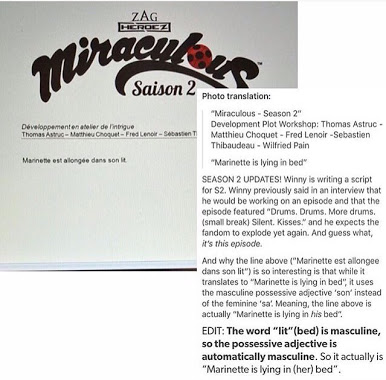 Aweee! I can already picture all this: please continue!! 🐞

Great job, I hope you’ll do a second part 😊🐞

Omg. I wish that will happen one day in the series, like, Mari falls asleep on Adrien's lap. ❤🐞