Thank you for ordering another Miraculous Marilyn Package! This package contains a fanfic that happens a day after Sapotis.

One calm evening in Paris..

In Marinette's room, Marinette opened her drawer where she kept the Fox Miraculous. Marinette picked up the box. Alya gave it back after all. She really did deserve to keep it, but Master Fu clearly said he needed it back afterwards. Marinette sadly looked at the box. She did miss Rena Rouge and Trixx.

Marinette: I really wish she could have kept it. She really deserves Trixx. *holds up the Fox Miraculous box*

Tikki: All that happens, happens for the best. Master Fu may have his reasons for wanting it back. I'm sure Alya will get another chance to help out. Now, let's get this back to Master Fu.

Marinette: I sure hope you're right, Tikki. Do you need another cookie?

At the massage shop...

Wayzz: I sense Tikki near by. Ladybug is coming.

Master Fu: Already? I have her the box hist yesterday.

Marinette opens the door and Tikki flies in front of her. Marinette comes to Master Fu and the door shuts behind her. Tikki nods at Marinette, who nods back, then joins Wayzz.

Marinette: Master, here's the Miraculous I borrowed. *gives the box to Master Fu*

Master Fu: I'm surprised that the holder returned it to you. Tell me, who did you give it to?

Marinette: My best friend Alya. She's very trustworthy and kind. She promised to keep the secret.

Master Fu: Does she know who Chat Noir and you are?

Marinette: No.. She runs the Ladyblog and... I didn't want to take the risk.

Master Fu: I thought you said she was trustworthy?

Marinette: She is, but she also gets a little too excited at times.

Master Fu: *smiles* I would like to meet your friend. What was her name?

Marinette: Alya. Alya Cesaire. She's in my class too. Should I bring her by, sometime?

Master Fu: Yes please, but come as Ladybug please. If she is like you said, I may think about giving her the Miraculous to keep.

Master Fu: You should get going. It's the middle of the night and I assume you have school tomorrow.

Tikki and Marinette get home quick and slip upstairs without Tom and Sabine noticing.

Tikki: I'm so sleepy *cute yawn* We should get to bed.

Lights out, they go to sleep.

Marinette gets up on time and gets to school. She slides into her seat next to Alya. Alya was still radiant with her secret. Of course, she hadn't told anyone yet and didn't plan to.

Alya: My sisters really miss you. They said that you were super fun and you were the only one who could 'tame the Sapotis'.

Marinette: I'd love to come meet 'the Sapotis' again.

Alya: They even made Ladybug, Chat Noir and Rena Rouge honorary Sapotis!

They share a laugh over it. Then Nino and Adrien start talking about something.

Adrien: Hey, did you see Rena Rouge day before yesterday? She teamed up with Ladybug and took down the Sapotis!

Nino: Yeah! I wonder if she'll be back. I got Rena Rouge on camera. Alya posted it on the Ladyblog last night. We both went through it and came up with some theories, but we had to give up, 'cause we know nothing about the new heroine.

Adrien: I heard that Ladybug herself gave someone the Fox Miraculous.

Nino: *makes a quick note of it* I gotta tell Alya that!

Ms. Bustier walks in and greets the class. The class returns the greeting and the lessons begin. At the end of school, Marinette invites Alya to her house. Alya gladly agrees and comes. They both head upstairs and talk.

Marinette: Hey, Alya. I uh... forgot something in the bakery! I'll be right back, okay?

Alya: Okay, but don't be too long.

Marinette: *nods and leaves her room*

Alya is just checking her texts. Nino tested her the rumor Adrien told him. She just chuckled and sent a shocked message, but she wasn't shocked at all. A second after she sent the text, she heard someone behind her.

Alya: *turns around* Ladybug?? What are you doing here? (she's very happy to see her again)

Ladybug: Come with me. There's someone you need to see. And I'm sure you miss Trixx. He really is adorable, isn't he?

Ladybug: *smiles and nods* Come on. *holds out her hand to Alya*

Alya: *happily takes her hand and they both set off*

Ladybug throws her yoyo and pulls Alya and herself over the rooftops of Paris. They finally stop in front of a small building. They enter and walk up to a small, dark brown, bamboo styled door.

The door swings open and Ladybug walks in. Alya is awed and she follows Ladybug. When Ladybug steps aside, she could see a small old Chinese man in a Hawaiian shirt. He seemed wise. He smiled up at her. Then he stood up and smiled warmly at Ladybug, then at Alya.

Alya turns around to see a small, green creature with yellow eyes and a turtle shell smile at her.

Wayzz: That's right, I am Wayzz. The Turtle Kwami. I am Master Fu's kwami.

Ladybug: Master Fu is the last known member of the Order of the Guardians.

Master Fu: That is correct. Have a seat, Alya. We have some explaining to do.

Ladybug, Alya and Master Fu sit down and Wayzz sits on Master Fu's shoulder. He begins the story.

Master Fu: Thousands of years ago, a mage created the Miraculouses. Magical jewels which bestow power upon their holder, with the help of their Kwami. There are many Miraculouses that were created. A kwami is born every time a new idea is born, for example, Wayzz is the kwami of wisdom.

Ladybug: Every Miraculous is connected to a kwami. My kwami is Tikki, the kwami of creation. She was this the first kwami to come into existence.

Master Fu: Yes. You bounded with Trixx, the kwami of wits.

Saying so, he stands up and walks over to the gramophone at the back. He somehow made the top open like a box and he took something out. He closed the gramophone and descended from his little stepping stool and returned to his seat. Alya immediately recognized what he was holding. She gasped.

Ladybug, Master Fu and Wayzz smile and watch the reunion.

Master Fu: Take care of him and the necklace. Ladybug did the right thing by giving you the Fox Miraculous.

Wayzz: And anyway, it's cruel to try an break the bond of a holder and a kwami. *sits on Master Fu's shoulder*

Ladybug: Ready to head back?

Alya: Marinette! I totally forgot about her! We have to get to her house now! Thank you, Master Fu, thank you Wayzz!

Ladybug and Alya take leave of Wayzz and Master Fu. Ladybug again throws her yoyo and takes Alya back to the bakery. The necklace on Alya's neck was now plain silver.

Alya: You too, Ladybug!

Marinette: Hey Alya! Sorry I took so long. I had to go get something for the bakery and it took some time.

Alya: No problem. *quickly tucks her necklace into her shirt*

Marinette: *pretends to not notice* So, how's the Ladyblog? Anything new?

Alya: Yep! The video of Rena Rouge. Nino filmed it because uh... I was busy trying to catch the Sapotis, I mean, my sisters.

They both laugh as the sunset light pours through the window and makes their laughter even sweeter.

Somewhere else in Paris....

A certain black creature is looking at a camembert box, attempting to open it. Suddenly, his cat ears perk up and he senses something. He whispers.

Nino goes out to his balcony and puts on his headphones. He puts on his favorite song and starts tapping his feet. The song is really energetic and tapping soon becomes dancing. But....

Rena Rouge appears on the scene and stands under the balcony, arms spread out, waiting to catch him.

Nino: *coincidentally falls in her arms*

Rena Rouge: 😰 Whoa. Which floor is your house on?

Nino's Headphones: *hits Rena Rouge in the head and still playing the song*

🎵WHAT DOES THE FOX SAY?🎵

I know this is dumb, but I think it makes sense. We've seen that Andre became Glaciator, Kagami became Riposte, Ella and Etta became the Sapotis, Gabriel was Collector, etc. I just had a thought... what if.... LUKA IS STYLE QUEEN??

Free item with this package:

A MariChat fanfic (by me) spoiler: 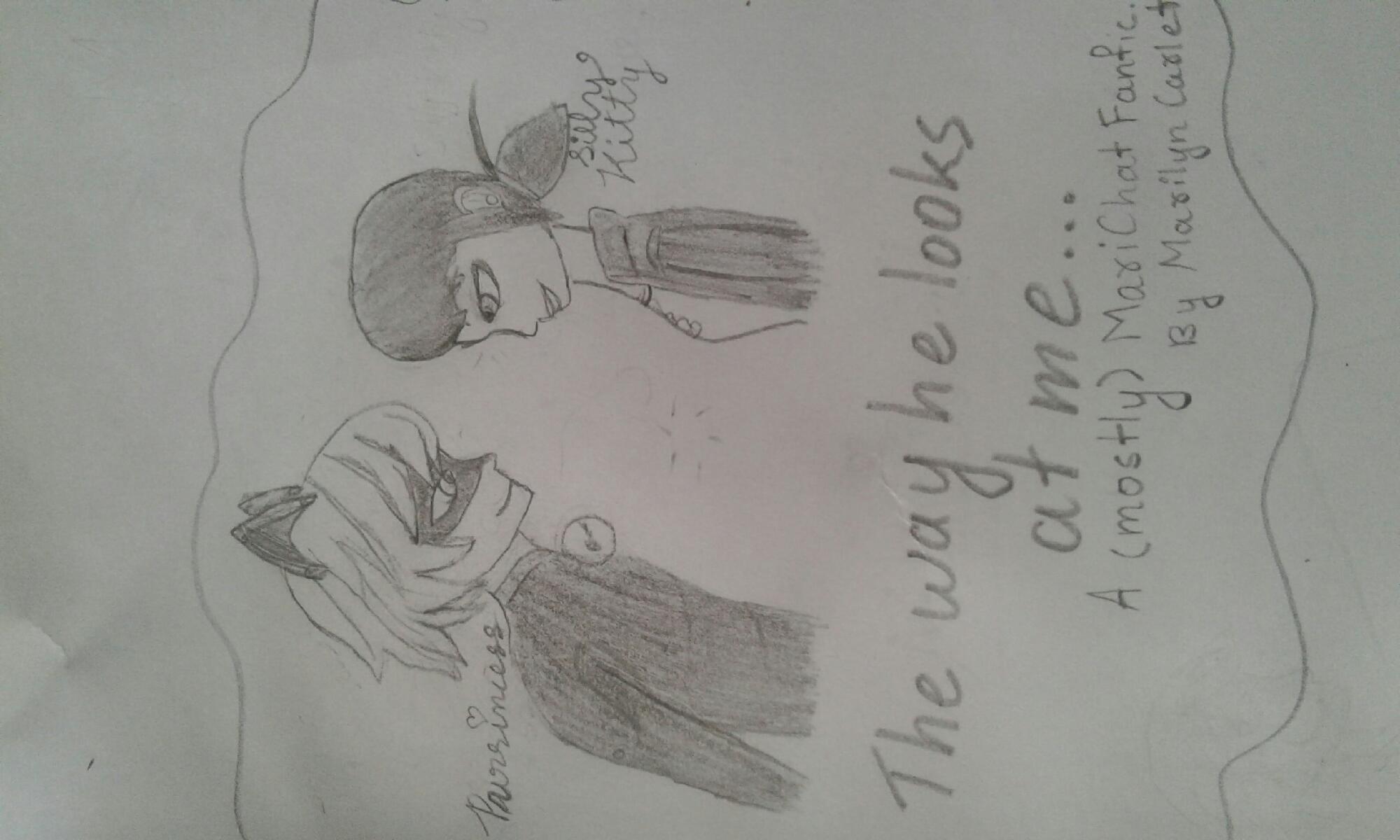 I LOVE this! I'm so glad I subscribed!

So cool! This should happen on the show! You are a great writer, congrats! ❤️🐱🐞🖤