Okay, so now I'm doing this thing which I'm calling 'Marilyn Packages' where you get a short fanfic, bonus, maybe jokes or memes and other little treats. A package is released every week, so thanks for ordering! Stay Miraculous!

It was a bright Saturday morning. The park was full of kids, the streets were almost empty and the bakery was busy. So was Adrien's father, as usual. As for Adrien, he was in his room, watching a recent video on the Ladyblog.

Alya: (On the Ladyblog) Hey everybody, it's me, Alya. And today I present a new video of Ladybug and Chat Noir saving the day again! *video of Chat Noir being heroic* Wait, where's Ladybug? *Chat Noir defeats the bad guys and the police arrive* That's odd. But Chat Noir saved the day again! Stay connected! *video ends*

Adrien: Even Ladybug didn't come today. I feel like the most invisible person in the world today.

Plagg: I can see you just fine.

Adrien: I mean nobody's paying attention to me. Father promised to join me for breakfast and didn't show up. Ladybug didn't come today. Nino's phone died so I can text him either. You're the only one who's listening to me today, Plagg.

Plagg: I'm here for ya, Adrien. Literally and gladly. *cute cat smile* Have you ever considered getting a pet?

Adrien: My dad didn't even let me have a birthday party, what makes you think he'll get me a pet?

Plagg: Yeah. You can take him out for walks and get out of your house more often. We could also train the puppy to do cool tricks and stuff.

Adrien: Okay then. A puppy it is.

Plagg: I prefer German Shepherd or Pomeranian. I've experienced living with both so I suggest one of them.

Adrien: Which breed do you think will suit me best?

Plagg: Pomeranian. They're smart and cute. A lot like Ladybug. So you won't feel too lonely.

Adrien: Okay then. Pomeranian puppy. I'll see what I can do.

At lunch time, Adrien is eating alone again. Natalie comes by to inform him about his father's absence again.

Adrien: Um, Natalie? I was wondering if... you could ask father if I could... get a pet?

Adrien hadn't heard from his father yet. He kept asking Natalie every day. But she just told him that his father was thinking about it and hasn't decided yet.

Adrien: I guess so. It's like my father doesn't even hear me sometimes. I cant hear him either. And even if I want to talk to him, it's through Natalie. He's so.... invisible. I know he has a big company, but he can't be running around doing business the whole day.

Plagg: Sometimes I wonder if he's hiding something. Also I did have a theory that he was Hawkmoth, but I dismissed it when he was akumatized.

Adrien: We all had that theory once. *sigh* I just wish we can spend more time together...

To his surprise, his father comes in. He still has his professional gait and face. He came up to Adrien, who was actually standing near the windows.

Adrien: Huh? For what?

Gabriel: (apologetically) I'm sorry for... everything. I haven't been spending enough time with you since... your mother disappeared. I understand that you miss her. However I can't neglect the business either. I have a lot of work that still has to be done. To make up for my absence, I decided to get you a new friend. Natalie, bring him in, please.

Natalie walks in with a big white box with a red satin ribbon on it. There were holes in one of the sides of the box and there was something moving inside.

Adrien gasped. Plagg was smiling from the foosball table where he was hiding in the goal. Gabriel took the box from Natalie. She was smiling warmly too. So was Gabriel. He set down the box in front of Adrien.

Gabriel: Go ahead, open it.

Immediately a small white snowball leaped out. Adrien caught the snowball and realized that is wasn't snow. The thing looked much like a fox, but it was tiny, white and fuzzy. It had three dots on its face, the eyes and the nose. It was a Pomeranian puppy! He was only a little bigger that Plagg himself, who was 10 centimeters tall. The puppy panted and yelped at Adrien. Adrien was as radiant as the sun in joy. Plagg's jaw fell as he fell in love with the puppy. Finally Adrien caught his breath.

Adrien: Thank you, Father! *hugs him with one arm and holds the puppy with the other*

Gabriel: *hugs him back and smiles*

After the hug breaks.

Natalie: Sir, there's still one important task left to do. It's very urgent. I think it's best if taken care of immediately.

Gabriel: *sighs* I need to take care of this. Will this puppy be happy with you?

Adrien: Yes. Can you come for dinner today, please?

Natalie: Sir, I meant we need to name the puppy. It is important, isn't it? *grin*

Gabriel: Oh of course! That is urgent! So what shall we name your brother, Adrien?

Natalie: Felix. It's music to my ears!

Adrien: Thank you, father! Thanks you, Natalie! Thank you so much! *pets Felix*

(Felix sniffs his hand and licks it)

Gabriel: I'll send his stuff up soon. He'll be your roommate from now on.

When Gabriel and Natalie leave (both still smiling), Plagg files out to meet Felix. He lands on Adrien's shoulder and cocks his head at Felix. Adrien puts Felix down on his bed. Plagg and Felix sit face to face and stare at each other curiously. Plagg tilted his head to one side. Felix imitated. Plagg lifted his tail. Felix imitated him. Finally, Felix approches Plagg and sniffs him. Plagg sniffs him too. It was a funny sight. After a while, Adrien burst out laughing and Plagg was sitting on Felix's back.

Plagg: We'll get along just fine! And he like camembert too! Look! *gets a piece* Here boy! *feeds Felix the cheese*

So for the rest of the afternoon, Adrien, Plagg and Felix play together as the warm light of sunset fills the room, making it glow in happiness.

At school, Adrien's bag starts moving around on its own. It makes weird noises and keeps jumping. Suddenly, it bursts open and Felix comes flying out with Plagg in his mouth. Plagg immediately freezes and acts like a dog toy. Felix drops Plagg and sniffs and pokes him. Everyone sees the adorable puppy running around the classroom.

Everyone dives to catch Felix, but he's too fast. In the confusion, Adrien grabs Plagg and hides him. Finally, Marinette catches Felix in an interesting manner.

Marinette: *takes out a macaron* Here puppy! Come to the treat!

Felix: Arf arf ar- ?? Arf! *stops and scurries over to Marinette* *sniffs her* *takes the macaron and eats it* Arf! *jumps onto Marinette's lap and nuzzles*

Adrien: Thanks. *keeps petting Felix to calm him down*

Ms. Bustier: Adrien, why was there a puppy in your bag?

Adrien: Oh, this is Felix. He must have sneaked into my bag when I wasn't looking. I'm sorry.

Everyone in class was looking at Felix and smiling at how cute he is.

Adrien: I guess I'll call my driver to take him home.

Marinette: Hehe, stop it! That tickles! He's in no hurry to get home.

Ms. Bustier: Does anyone have any allergy to dogs?

Ms Bustier: Umm, Adrien. It's the middle of the day and I'm sure your driver must be tired. How about you keep him with you until you go home? How does that sound?

Felix: *sitting between Marinette and Alya on the table* Arf!

Adrien: Wow! He really likes you, Marinette. Is it okay if he stays with you a little while? Marinette: Sure! Be good, Felix. (pets him)

Felix: *sits up and faces the front of the class*

Felix sits and listens to the class the whole time, as if he were a student too. So that day, Felix made a new friend, Adrienette happened again and the day was well. 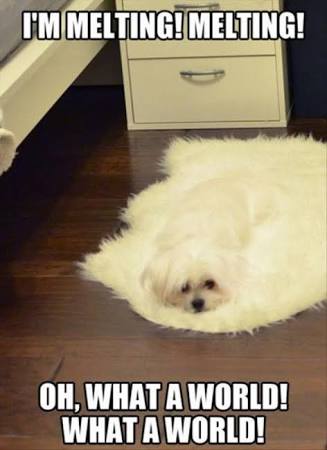 he loves all kinds of cheese. camembert is his favorite though

in Dark Cupid, when they're talking about love, Plagg starts listing the types if cheese he loves.

and cheese powder on top

and extra cheese on the side

This was awesome!!!! I want another one please!