Note: There is a something in on where i got the idea of this story.

We start on a rooftop, at night of the event. Loup stands alone.

Loup puts on a ring and grips his hand into a fist. The ring glows as echoes are heard.

Renard (echo): Unless you learn, you can never best me.

??? (echo): Don't follow your father's footsteps. He didn't choose that life. It choose him.

Haw Moth: What is this? Sadness...sorrow...anger...regret, a recipe for chaos.

Hawk Moth corrupts a butterfly and turns into a akuma

Hawk Moth: Fly away, my little akuma and evilize him.

The akuma flies away and posses the ring. The butterfly outline forms on Loup.

Hawk Moth:You summoned me? Who are you?

Loup: I am Loup, and i want to make a deal with you.

Loup: There's an artifact i'm after, but the place is so crowded, that i can't get it without being seen.. I need you to give me the power i neex to retrieve it.

Hawk Moth: And what do i get in return.

Loup: I know many things, Hawk Moth. I know all about the Miraculous, their previous wielders, and their powers. I even who you might be. So do we have a deal?

Loup: Okay, in the meantime, i'll be doing my part. Contact me when you can...or i can contact you

Loup is akumatized into a darker version of himself (along with having a wolf's tail and ears).

???: (looking at himself) Hmmm... not bad. (walking towards a window, seeimg his reflection). Just call me "Loup D'ombre" (translation: Shadow Wolf).

At the bakery, Marinette just finished getting ready.

Tikki: You look beautiful Marinette. But, where did you get that dress? I never seen it in your closet.

Marinette: I just made. I was saving it for an occasion like this. But there's one problem.

Tikki: What would that be?

Marinette: What would Adrien say when he sees me? Would he complement me? Would he say i'm beautiful? Would he fall in love me? I hope its the last one.

Marinette picks up her phone.

Tikki: What was that about?

Marinette: Mr. Stérn sent a limo to pick me up. But i asked him to pick up Alya first before me. She's pulling up right now, so lets go.

Marinette: as i'll ever be.

Alya: Are your parents coming?

Marinette: They already left. Apperantly, Mr. Stérn hired them to be caterers for the event.

Marinette gets inside and closes the door. The limo drives away.

Meanwhile, at the Agreste Mansion.

Adrien and Nino are getting ready in his room.

Nino: Hey, thanks for lending me a suit. Especially my style.

Adrien: Yeah, i prefer to a have variety. But technically, those are different parts of suits.

Nino: Whatever, it's my style. So you ready?

Adrien: Not yet, i need to grab something.

Nino walks out of the room. Plagg pops out from the bathroom.

Adrien: What's with you?

Plagg: This party is gonna have a buffet, won't it? I can't wait.

Adrien: Alright, just don't try anything. I'll get you something.

Adrien pulls his jacket pocket as Plagg flies in there. Adrien walks out the door.

Adrien: Yeah, the "Gorrilla" is outside, in the car.

Nino: Hang on. Where's your dad?

Adrien: He left early, wanting to meet with Mr. Stérn before it starts.

Adrien and Nino walk outside, Adrien locks door. The two then walks towards the car. They get in. The car drives away as the gates close.

A few minutes later. Marinette and Alya just arrived at that Champ de Mars. They turn around, seeing many people from many places (Italy, UK, Russia, Egypt, U.S, etc.) Chairs and tables (with candle light) set up all over garden. A buffet set up with all kind of international cuisines and deserts. A stage set with chairs and Music stands, along with speakers on the side and a piano in the center.

Alya: I know, so many people here, from so many places.

Marinette and Alya turn around, seeing Adrien and Nino (along with the "Gorrilla"), walking towards them.

Nino: Well, were all here. Should we grab a table?

Adrien: (turns around, facing the "Gorrilla") We'll be fine. You can go, maybe hit the buffet.

The Gorrilla nods and walks towards the buffet. Then they walk and sit down at a table.

Nino: Hey, isn't that your dad?

Nino points towards Gabriel Agreste, with Nathalie, shaking hands with other people.

Adrien: (looking down) Yeah, that's him.

Adrien: No, its nothing.

Marinette: So, what do you boys think about all this.

Nino: It's awesome. I though it was gonna be boring, but i was wrong.

Alya: You wouldn't have, especially since we'rr together.

Marinette: That reminds me, have you we seen anyone we know?

Adrien: No, but this place is crowded.

Alya: (gets up) Hey, i'm gonna grab some food. (looks at Marinette) You coming? (winks)

Marinette: No thanks, maybe later.

Nino: Mind if i come?

Alya: Not at all.

Nino gets up and walks with Alay, towards the buffet.

Adrien: So, did you hear about what happen to the other two winners?

Marinette: (blushes, shyly) Why would you say that?

Adrien: Because i thought i was gonna be alone. I was gonna have to work twice as hard for the show.

Marinette points at Cooper, who walks on to the stage with a microphone.

Cooper: Hello and welcome, to the Project: Creed Pre-release Celebration.

Applause is heard as everyone claps.

Cooper: As i look around, i see many of you have come far and wide. I do hope to make your travels worth the time and effort you spent. I would like to start tonight off with a special performance. I have called up some old friends to preform a special piece for you tonight. This piece was made in honor of a friend to remember his family. It was also made for us to appreciate ours and to honor our lineage. Without further ado, enjoy.

Applause is heard as the 4 musicians walk on stage, with a guitar and violin. The third sitting down on the piano and the fourth taking the microphone and putting it on the stand.

Marinette: That was the most beautiful thing i ever heard.

Adrien: Yeah, i'm fine. Nothing to worry about.

Alya and Nino comes back with plates of food.

Alya: ...and we brought you guys something to eat.

They sit down and hand the plates to Adrien and Marinette.

They start eating on the cusines.

Meanwhile, on a nearby rooftop.

Loup D'ombre: Well that was pleasant, but the moment has passed. Back to work!

Loup disappears as he turns invisible. The sound of a thud is heard on street level.

I hoped you liked it. Find out what Loup D'ombre is after... and who will stop him in Chapter 10: Shadow Fall.

Here's Chat Noir 12's piece on Adrien (Note: he didn't have time to color it). 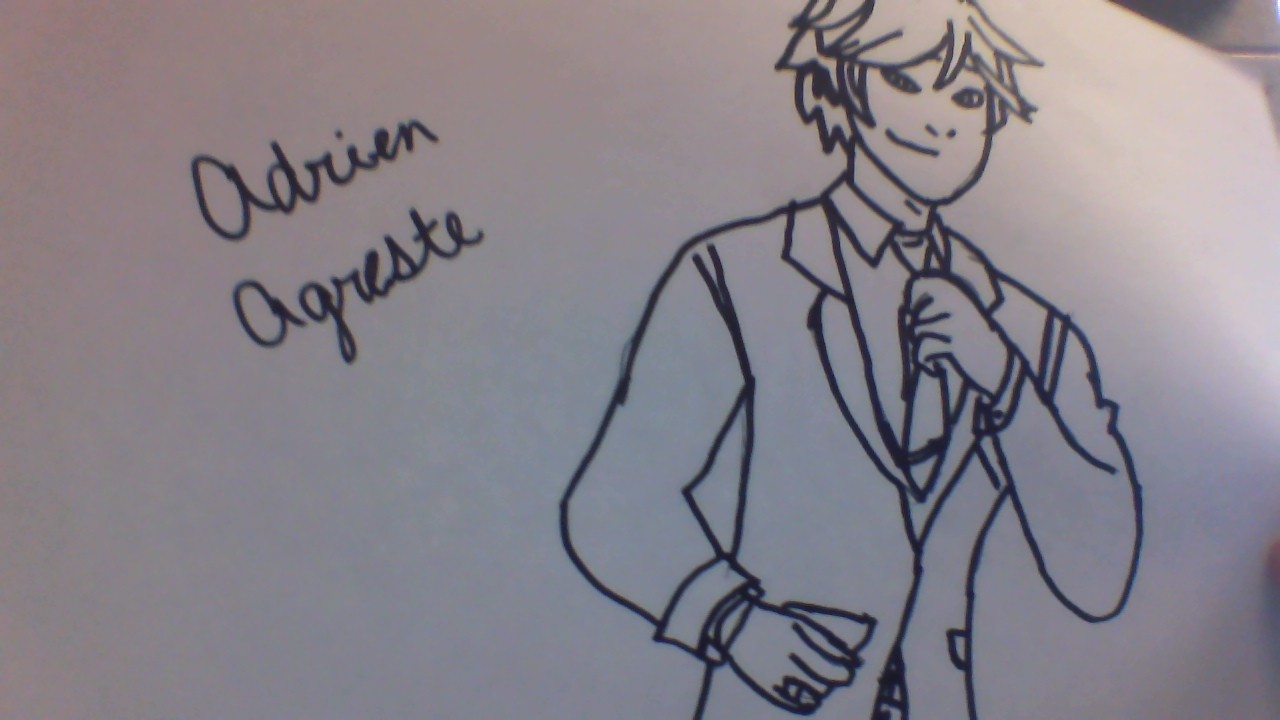 here's the colored one. 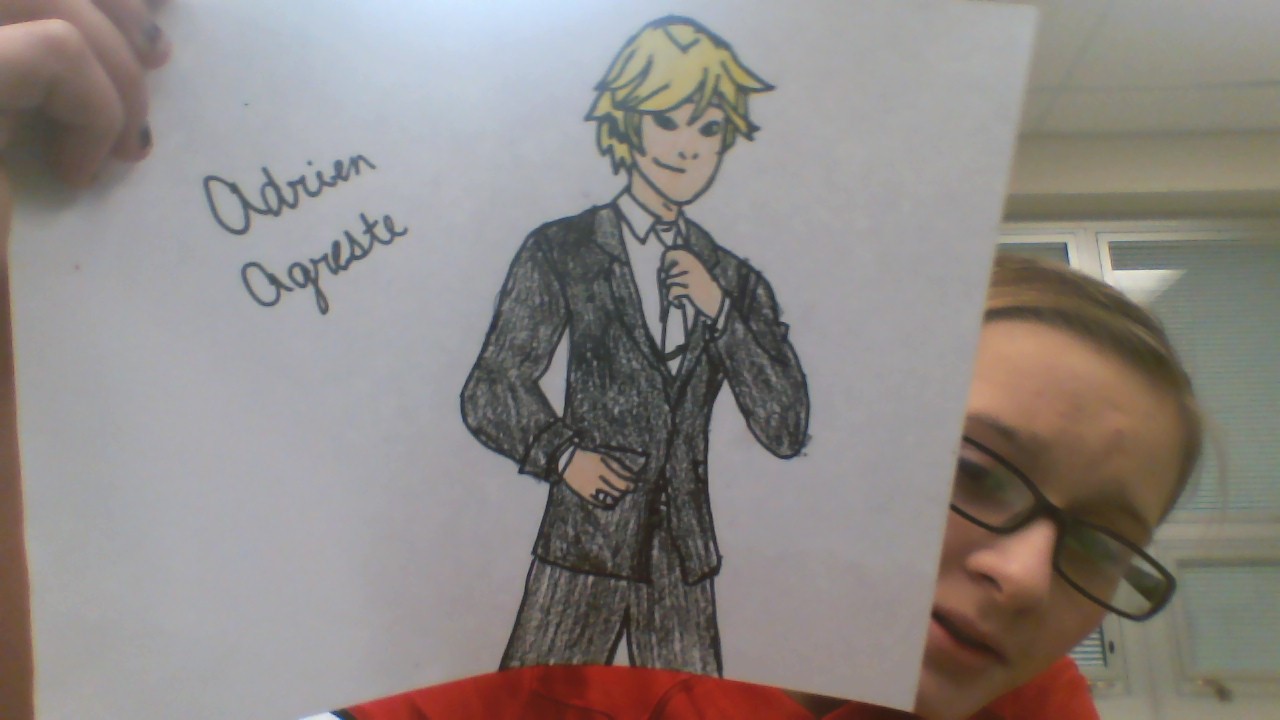 Thanks for that (better late than never).

your welcome, sorry I couldn't do it sooner.